Review – The Prisoner of Shark Island 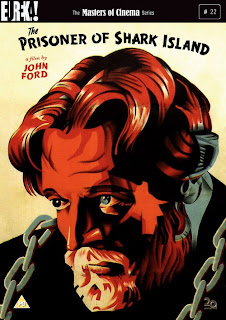 Perhaps it is wrong to judge a film by its historical accuracy, but because of the power of film and the fact that history portrayed incorrectly for the sake of drama can often be misconstrued by viewers as what actually happened, I tend to watch historical dramas with a degree of unease. The Prisoner of Shark Island confirmed this unease, while at the same time entertaining and angering.

The Prisoner of Shark Island purports to be based on the true story of Dr. Samuel A. Mudd, one of the eight people charged and convicted of aiding in the assassination of President Lincoln in 1865. As portrayed in the film, Dr. Mudd, played well by Warner Baxter, was simply following the Hippocratic Oath when he set John Wilkes Booth’s broken leg. Moreover, he claims he was ignorant of Booth’s identity when he did so. However, for his good deed, he is arrested and put on trial. The evidence against him is circumstantial at best, consisting mainly of facts that Northerners would find offensive – that Mudd owned slaves and fought for the South in the Civil War – and the testimony of the soldiers that arrested him. Mudd’s pleas for justice go unheard, and he is found guilty.

The film powerfully shows that the military tribunal who decided Mudd’s fate was not impartial. Before the trial even begins, they are instructed to overlook any feelings of reasonable doubt they might have or any lack of evidence against the defendants. In effect, they are asked to return a guilty verdict, which they are told the people of the United States are calling for. It is no shock then when that is the very verdict that is handed down. The scene that follows is extremely powerful, as viewers are shown three of the defendants being brought out to receive their punishments – death - immediately. The sentences are halted after a third punishment is meted out, which makes sense, as in reality only three of the defendants were actually sentenced to death. The others all received life sentences, but withholding that information does add some very suspenseful moments.

It could be said that The Prisoner of Shark Island is three films. It is first a political film detailing the injustice that Dr. Mudd experienced at the hands of the U.S. Government during a time of tragedy. Later, it becomes an escape film, as Dr. Mudd attempts his flee Dry Tortugas, an island off the coast of Florida for those inmates serving life sentences. Its third act is that of a medical drama. To me, the strongest parts were the first two. Many contemporary viewers have seen a resemblance between what takes place on Dry Tortugas and what is currently taking place at Guantanamo Bay in Cuba, both in the way military tribunals are held and in the treatment of the prisoners, and I have to agree with them that the resemblances are there. I also liked the relationship between Dr. Mudd and his wife Peggy (Gloria Stuart) and that of Dr. Mudd and his former slave Buck (Ernest Whitman). There is a rather tender moment in which Dr. Mudd takes care of Buck when they are lock up together that is rare for its time.

This brings up, though, the most uncomfortable part of the film, its portrayal of African-Americans. The film takes place after the end of slavery, and yet the African-Americans in The Prisoner of Shark Island are nothing more than slaves themselves. They call Caucasian characters “Master,” even when those characters have referred to them as “Boy.” They chase off a carpetbagger who tries to inform them of their right to vote after Dr. Mudd tells them to, and African-American prison guards are presented as cowards when there is an outbreak of yellow fever on the island. In one scene, as a doctor slowly falls to the ground sick, the guards around him – all African-Americans - refuse to help him, instead steadily retreating in fear. Even worse is the fact that they only respond sensibly to the outbreak after they are threatened with being hung for treason. One of the characters reasons that death by disease is better than death by what would essentially be lynching.

In the end, The Prisoner of Shark Island is a mixed bag. It is interesting and relevant while simultaneously being occasionally inaccurate and unsettling. Before the credits roll, we see two family reunions, yet I couldn’t help feeling that one was slightly less respected and played for humor, as if the final image John Ford wanted viewers to see was one designed to inspire chuckles. The problem is that seventy-two years later, it simply doesn’t. (on DVD)

*Dr. Samuel A. Mudd has the unfortunate distinction of being the inspiration for the phrase my name is Mudd.
*Contrary to the film’s opening scroll, Dr. Mudd’s conviction has never been expunged, and the extent of his familiarity with John Wilkes Booth is not as clear cut as the film makes it out to be.
Posted by Azrael Bigler at 6:13 PM