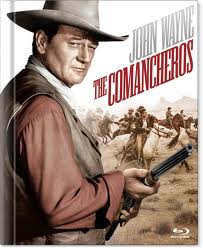 In almost every martial arts film, there is a moment in which the film’s hero walks into a room and suddenly becomes aware that he is no vastly outnumbered. To all sides, villainous martial arts experts will begin to approach him, perhaps even surround him, all the while glaring one of those sinister looks that reveals just how much they know the advantage is in their favor. And then, as if their brains had just been collectively shut off, one person attacks while everyone else stands around and watches. These scenes never fail to elicit eye roles of incredulity, as they should. I mention this because Michael Curtiz’s The Comancheros employs a similar scheme to ensure victory for its undermanned protagonists. However, instead of ninjas, samurai, or kung fu experts, we get a combination of Native Americans and Caucasians who seem to think that the best strategy for a gun fight is to ride straight toward the men that have their guns drawn. And then, when they see that the strategy is ineffective, they elect to repeat it. You’d think that someone would rally the troops together and suggest they try something new.

The Comancheros stars John Wayne in the role of “Big” Jake Cutter. Cutter is a Texas Ranger in 1843 who is sent to apprehend and bring to justice a man named Paul Regret (Stuart Whitman), wanted for killing a Frenchman in New Orleans during a piston duel. Unfortunately for Regret, Cutter arrives at a most inopportune moment, just as Regret has just spent three days with a woman that he finds himself wishing he could spend an eternity with. Recognizing Regret’s predicament, Cutter allows him to try to say goodbye to her. He’s unsuccessful. From there, the film takes us on a bit of a Western road trip, as Cutter and Regret attempt to travel by horseback back to Texas, where Regret is to be turned over to the authorities and Cutter is to receive a reward of $300. They don’t make it far before stumbling upon the sight of a massacre – an entire family wiped out by Comanche Indians. They are not strangers to Cutter, and Wayne plays the scene with incredible stoicism – inwardly grieving, while outwardly doing the only thing he can think of, giving the family a proper burial. Throughout his career, Wayne excelled at these kinds of moments, moments in which the tough exterior of the characters he portrayed came down just long enough to let viewers see his emotional side.

Eventually, The Comancheros settles into what filmgoers will now recognize as a variation of the buddy film. That genre calls for one character to be tough in the beginning but softer as the film progresses. The other character must be a decent man who just made a mistake. I imagine that is why the screenwriter gave this character the last name Regret. Eventually, they’ll become friends and have one grand adventure together before parting ways, at least until the sequel that is. While this is a somewhat standard genre today, to audiences in the 1960’s, many of whom were seeing it for the first time, it must have seemed quite novel.

There are aspects of The Comancheros that have not aged well and others that have a power that time and present-day sensitivities will likely never diminish. First, the film is dated in its portrayal of Native Americans. How could it not be? From its stereotypical use of drum beats every time a Native American character approaches to its depiction of them as being nothing more than hostiles and drunks, the film will no doubt be tough for contemporary audiences, especially those who grew up watching Dances with Wolves, Smoke Signals, and Thunderheart. Those films and other like them expanded the way Native Americans were portrayed on screen, expanding them into fully developed characters instead of mere caricatures. Here, the Native American characters are mostly fodder for humor or extras in combat scenes. One scene in particular left a bad taste in my mouth. You’ll know it when you see it.

However, there are facets to this part of the film that feel authentic, as well. It is true that alcohol was used as a means of weakening some Native Americans, and it is equally true that guns turned conflicts between settlers and Native Americans much more violent. The film also gets right the often contradictory nature of some of the heroes during the American West. In one scene, Regret sees a group of approaching Native Americans and begins to draw his weapon, only to be stopped by Cutter. These are tame Indians, Cutter explains. The term is likely to strike many as cruel and insulting, but I have no doubt that there were brave and decent people who thought this way in the 1800s. We’re just not asked to root for them in Hollywood films much anymore.

“Big” Jake Cutter is the kind of role that Wayne generally excels at, and while Wayne plays the role as well as he can, there are limits to what he can do. Here, like in 1969’s True Grit, he’s hampered a bit by a script that asks him to try to be slightly comical. To make matters worse, for a few minutes Wayne is called upon to do something that is absolute torture for the audience: sing. If that weren’t bad enough, the film requires him to perform an encore, which only goes to demonstrate that the character of Jake Cutter is just as terrible a singer sober as he is drunk. The singing wouldn’t bother me so much if it weren’t the beginning of a scene that had me rolling my eyes with incredulity, for what follows is one of those “only-in-Hollywood-westerns” fist fights in which a character throws a punch and then stands there waiting for the other guy to throw one back. Of course, at they end, the two brawlers have proven their manhood and walk out of the bar together once again singing that awful song of theirs. Now I have no way of knowing if people really threw down like this in the Old West, but as it plays out of the screen, the scene seems to be lacking in authenticity.

To say that this is unfortunate would be an understatement, for there is much to commend The Comancheros for. It has two rather compelling lead characters, and some particularly interesting supporting characters, from the bold and outspoken Pilar Graile (Ina Balin) to the sweet Melinda Marshall (Joan O’Brien). The first has lines that cackle with wit and energy, and Pilar has a particular way of interpreting the phrase I love you that will have you wondering for a moment whether she’s got it right; the other, Mrs. Marshall, though only in one scene, has moments of tenderness and subtle longing that are incredibly moving. When told by her daughter that “Uncle” Jake is here, we watch as she takes a moment to make sure she looks presentable. O’Brien’s facial expressions immediately make it clear where Melinda’s devotion lies. This leads to a conversation between Cutter and Regret about love and loyalty that is practically priceless.

Problems and all, The Comancheros ends up a success. It has a thrilling final act, and characters that are remarkably realistic and involving. Wayne and Whitman play off each other very nicely, even when the script gives them some rather corny things to say, and the film provides one of the best character arcs I’ve seen in a John Wayne film. In fact, by the end of the film, it is clear that both Cutter and Regret have had a positive effect on the other. It helps that the film is directed by Michael Curtiz (Casablanca, Yankee Doodle Dandy), whose most popular films often involved relationships and acts of heroism. The Comancheros would be his last film. (on DVD and Blu-ray)

Labels: 3 and a half stars, John Wayne, Michael Curtiz, reviews