Review - When the World Breaks 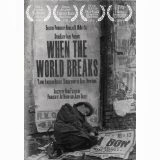 Hans Fjellestad’s When the World Breaks is a documentary comprised of eleven parts. The first eight focus primarily on the Great Depression of 1929 and part nine focuses on more recent history, in particular, Japan’s “lost generation” of the 1990’s, and includes an interesting explanation of the four sources of stimulus. It is the film’s last two parts, part ten and the film’s epilogue, that prove the most problematic, for they reveal the filmmaker’s desire to end on an underserved optimistic note, similar to the way current documentaries about climate change and nuclear weapons end with overly optimistic intertitles that claim that the power to solve complex global challenges rests in the hands of common people. If only it were that easy.

The film, for the most part, is fascinating, and it often touches on aspects of the Great Depression that have often been ignored. In part one, we hear personal testimonials from such famous people as Phyllis Diller, Art Linkletter, Ray Bradbury, and Mickey Rooney. Of these, I was most intrigued by Art Linkletter’s and Jerry Stiller’s personal narratives. The second part opens with the revelation that there is no agreement about what exactly happened in 1929. We also learn about the impact the Depression had on families and men in particular. It is in this part that actor James Karen divulges a sad chapter in his family’s life. It is a tale that will likely stay with viewers for a while.

Other parts have similarly powerful moments. In part four, we learn that during the Depression, unemployed men blamed themselves, not the system, and we learn that there were indeed integrated protest marches over the evictions of people who had nowhere else to go. Part five and six have some fascinating tidbits about the popular music and films of the 1930’s, including a rather curious reading of 1939’s The Wizard of Oz. Part seven details the governments’ hiring of artists and the meaning of the art world’s shift to social realism. Part eight explores the effects of President Roosevelt’s New Deal policies and includes an interesting cartoon in which a Mickey Mouse lookalike asks the president what the key to curing a depression is. Particularly surprising is an assertion that the New Deal did not end the Great Depression; instead, it is credited with having created the conditions for the prosperity and relative economic stability that followed the Second World War.

Each of these parts, as well as the ninth part, which has to do with Japan’s lost decade, is well constructed and could easily have been expanded into a full-length documentary of its own. In addition, the film uses its celebrity testimonials in the right way, and their stories alternate from inspiring to sad. Credit should also be given to Fjellestad for moving from their anecdotes to analyses of historians and experts at exactly the right time.

As I mentioned previously, the film becomes problematic towards the end of the ninth part, for it is here that the audience is told that regardless of the circumstances that have caused people to become unemployed, all they needs to do is to have confidence in themselves, roll up their sleeves, and start anew. It is a message that Thomas Friedman would no doubt endorse, and there is a great deal of truth in it. Here’s the problem, however. By the time the film delivers its rather rosy assessment of individual self-determination, its audience has already been shown examples of what helped ease the Great Depression and enabled the United States to avoid the kind of catastrophic economic crisis that struck in 2008 for more than sixty years. Needless to say, it was not just young entrepreneurs who made a lot of money on Wall Street creating small start-up companies. Ignored are the generations saddled with college debt and credit card debt, those whose job skills are no longer in demand, and the current political gridlock that has prevented the government from taking the kind of action that might actually help put more people back to work. Instead, the film seems to suggest that the United States’s economic problems can all be fixed with a little elbow grease and a lot of confidence. It strikes me as a rather naïve assessment.

That said, the film is a fascinating, eye-opening, and emotional experience. It is well-constructed and succeeds at giving viewers a rather complete overview of 1930’s America. It also is not a film that does all of the work for the audience; rather, it presents information about the Great Depression and lets the audience mentally compare and contrast that event and its aftermath with the 2008 crisis and what has come after it. In fact, were it not for the film’s cop-out of a final act, I have no doubt that the film would be embraced by history and economics classes all across the country. This is a case of a film whose parts are greater than its whole, but, really, what amazing parts those are. (on DVD in Region 1 and 3)