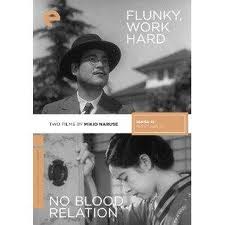 Mikio Naruse’s 1932 film, No Blood Relation, is a moving and powerful look at two women fighting to be the mother of one rather darling young girl. One of these women has a clear legal right to the child, and as she describes her guilt and heartbreak over a decision she made that severed their relationship six years earlier, it is hard not to empathize with her. On the other hand, the other woman, who has spent the last six years of her life raising the little girl as her own child - and by all accounts done an amazing job – has developed a rapport with her that many parents would envy. In essence, then, the film presents viewers with two decent, likeable characters and pits them against each other. It is a struggle I found myself wanting both of them to win.

The two women are Kinuko (Yoshiko Okada), an actress returning to Japan after a successful six-year stint in Hollywood that has made her very wealthy, and Masako (Yukiko Tsukuba), the young woman who has taken care of Kinuko’s daughter, Shigeko (Toshiko Kojima), for the past six years. In the film’s opening scene, Kinuko confesses to members of the press that she abandoned her child six years earlier in order to pursue a career in Hollywood and has now returned to see if she can make amends. The scene is not entirely credible, for which actress in her right mind would give such an admission of scandal to members of the press? However, perhaps this is a sign that Kinuko, having amassed a fortune, feels secure enough to speak from the heart.

Masako is in every way Kinuko’s opposite. She is the housewife of Kinuko’s ex-husband, dresses conservatively, and exudes a sense of sweetness and decency. Early on in the film, Naruse establishes the bond that exists between Masako and Shigeko through a series of close-ups, and we watch in amazement as their faces instantly light up in a way rarely seen on film. It is an editing trick, of course, but I was astonished at how well the images fit together. Shigeko calls out, “Mother,” Masako calls out, “Shigeko” and just like that, we know all we need to know about these characters.

Along with the two female characters, the film introduces viewers to Shunsaku Atsumi (Shin’yo Nara), Shiseko’s father, a good man whose poor business decisions have left him broke and desperate. During an interesting exchange, Masako implores her husband not to do anything rash or illegal, and instead of assuming a look of disappointment or frustration, he just looks at her with a look of ambiguous hopelessness. Another fascinating character is Atsumi’s mother, Kishiyo (Fumiko Katsuragi), a woman who has never known anything accept affluence and who early in the film proclaims that she will never accept poverty. Rounding out the cast are Kinuko’s gangster brother, his kleptomaniac assistant, and a poor neighbor named Masaya Kasukabe (Joji Oka). This last character is a bit of an enigma, and I suspect viewers will have different ideas about what motivates him to do as much as he does for Masako.

The film presents viewers with both legal and moral questions. Like Chaplin’s film, The Kid, made eleven years earlier in 1921, we are asked to consider the very definition of a family. We’re asked to consider what constitutes a mother and whether blood should really be the factor determining who has custody of a child. We’re asked to contemplate the depths to which someone will stoop to avoid destitution and wonder whether deception under such circumstances can ever be forgivable. And we’re shown examples of determination in the face of perhaps insurmountable obstacles, and we marvel at the strength it takes to return for more and the endurance it takes to go on despite evidence that what you want is unattainable. As I watched the film, I felt I knew how it would end, but I did not expect that what transpired would be so intense and emotional, and I did not expect to be as conflicted as I found myself being.

The film’s one misstep is the kleptomaniac assistant, for this character seems wholly inappropriate for a film as dramatic as this one is. The reason for this is that the character exists purely for comic effect, and it is simply not necessary in a film like this for the audience to laugh at someone punching himself in the face or being unable to resist the impulse to steal. However, the character will be familiar to anyone with experience watching silent films. It is as if filmmakers at that time didn’t think an audience could handle a film that was serious from start to finish.

No matter. The film remains both powerful and effective. It demonstrates the growing skill of its great director and hints at the masterpiece he produced later with Sound of the Mountain. And if everything seems a bit too neatly wrapped up as the film nears its conclusion, take comfort in the fact that it is an illusion, for rarely has so much been conveyed with a simple gesture that is not made. Watch it carefully. It is a moment to treasure. (on DVD as part of Eclipse’s DVD set Silent Naruse)