Here is movie star Olivia de Havilland photographed regally in June 2016 wearing a blue dress in a blue room in her Paris apartment on the occasion of her 100th birthday. Also shown here is a publicity photo of De Havilland as Maid Marian with Errol Flynn as Robin Hood, taken when the two were enthralled in an offscreen romance. 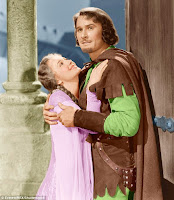 The screen star has long been known for her intelligence and independence. In a 1944 landmark court case which resulted in what became known as the De Havilland Law, she sued Warner Bros. to reduce the studio’s power and extend creative freedom to performers.

De Havilland still possess her sharp mind and independent streak. For her 100th birthday, she gave several interviews—including with NPR—that are well worth Googling. Reading those interviews led me to seek out “The Adventures of Robin Hood,” from my local library.

Never trying to be an historical account of the late Middle Ages, the Michael Curtiz film presents the legend of Robin Hood redone as Hollywood Movie Magic. It remains one of the greatest family movies of all time. In nearly all aspects, the film feels as fresh today as it was during its successful 1938 release and second go-round as a feature-movie rerelease back in 1948.

The story begins some time after King Richard has ridden off from Merry Olde England and gotten himself jailed after fighting a Crusade. The king’s mean, hedonistic brother Prince John has taken full advantage of the situation to raise taxes and in all ways ruin the lives of the peasants. Eventually, his life of debauchery will be foiled by the eagle-eyed archer and good-natured forest dweller Robin Hood, with the help of his motley band of income-inequality warriors. Also, Maid Marian, who lives in the court, will fall for the charms of Robin and have a change of heart about her royal privileges when she considers the injustice its cost has on the commoners.

This is a movie with many elements, all of them working in-synch together. It is a Technicolor production, which until then was still a mediocre technology. Due to the new breakthrough in color processing introduced in this film, the costumes and scenery were brilliantly toned to dazzle the audience, similarly to what would be seen again in “The Wizard of Oz” (1939).

The Oscar-winning film score was composed and arranged by the Austrian opera composer Erick Wolfgang Korngold. His music superbly pushes the battle action and fits the film’s many moods, such as the lighthearted times in Sherwood Forest and the romantic interludes between Marian and Robin.

The film was a milestone in action choreography. Our modern standards for adventure film battles - featuring clashing swords, whizzing arrows, etc.- began with the sophisticated realistic action that was carefully plotted in this movie. At times I thought I was seeing bits of action that would be actually referenced by George Lucas four decades later in his Star Wars trilogy.

Finally, the film has a wonderful cast. In the 1930s, in his earlier films, Errol Flynn had reinvented the role of the irreverent swordsman and rakish man of action using the template of the silent era’s Douglas Fairbanks Sr. Flynn was charming, young, and athletically gifted, and a wonderful fit for the role of Robin Hood.

Regarding Olivia De Havilland’s performance, in this modern era we tend to more fully appreciate an interpretation such as her Maid Marian, who is a strong and thoughtful woman. Nothing is played saccharine sweet with this Maid Marian.

Prince John is nicely played by Claude Rains, who would later again work with director Curtiz as the French inspector in “Casablanca” (1943). Also notable in the cast is Prince John’s very intelligent aide, Sir Guy, played by Basil Rathbone. Poor Sir Guy, almost every bit as intelligent as Robin Hood, hatches one doomed scheme after another to defeat his nemesis, and eventually faces off with him for one final sword duel.


“The Adventures of Robin Hood” is a movie that is fun for the whole family. However, battle scene are often intense and may not be appropriate for children under six.
Posted by Azrael Bigler at 9:00 PM