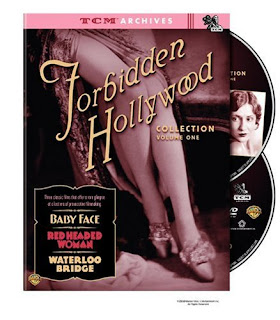 Pre-Code Hollywood is rarely boring. Whether detailing the loss of motivation and self-esteem in Kept Husband or the sensuality of women on a distant island in Birds of Paradise, movies made before the Hayes Code was enacted and enforced certainly pushed the envelope. Baby Face is no exception, and it is doubtful that the film could be made today.

In it, Barbara Stanwyck stars as a young woman who has been used by men most of her life. From the age of 14, her father made her “entertain” men to ensure that his seedy saloon had customers. A professor who sees something special in her encourages her not only to leave her miserable life but also and more importantly to use men for her own purposes. She takes his advice and heads to the big city, where she manages to sleep her way into a job and then into higher positions.

The film makes no apologies for its subject matter or for its “heroine.” In fact, it seems almost natural for her to use men, for the ones in the movie seem to be cruel or have low or weak will power, leading them to be unfaithful to their wives or fiancées. It is perhaps a sign that even pre-code films couldn’t go too far that the movie ends in typical Hollywood fashion. However, until what could be seen as a cop-out ending, it is a fascinating and wild ride.

Baby Face was released as part of Warner Bros’ and TCM’s Forbidden Hollywood Volume 1. The DVD includes both the theatrical cut and the original cut. Most of the original cut is the same; however, some differences are glaring. For example, on the train to New York, Barbara Stanwyck and her friend are caught. Instead of getting arrested, Stanwyck says she and the man who discovered them should “talk” about it and then goes to lie down. The man follows her. The scene does not appear in the theatrical cut. A few other scenes go to quick fade outs instead of directly implying sex. A prologue also appears to have been added to the theatrical cut, which further illustrates the transformation in Stanwyck’s character. It is an unnecessary addition.

Baby Face (3 stars – would have been 4, if not for the ending)
Red-Headed Woman (3 and a half stars) – another tale of a women preying on the weakness of men in pursuit of money and status
Waterloo Bridge (3 and a half stars) – one of the only films in which two people meet and fall in love overnight that is believable and logical
Posted by Azrael Bigler at 1:24 AM