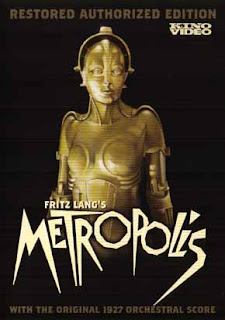 This is a true classic of the silent era, as well as a triumph of early science fiction. While it is a shame that some of the film has been lost, what remains makes for a fascinating look at a society that was built on the backs of laborers but has now turned against them. There are rumors of a revolt among workers, which would, it appears, be exactly what the head of the city wants. Metropolis is visually stunning with incredible sets and impressive special effects. It is a definite must-see.

There have been several releases of this film on DVD, as the film has been in public domain for quite a while. The version I saw was from Kino, and the picture was astonishingly clear. The DVD also includes an interesting documentary on the history of the film.