Review - Rebels of the Neon God 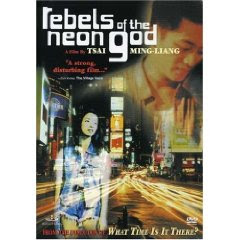 It’s ironic in a way that Taiwanese films have such a hard time finding an audience in Taiwan, as three of the most impressive directors around these days hail from the island. The late Edward Yang directed what many have called one of the best films of the 1990s, Yi Yi, a film that was never screened in Taiwan. Hou, Hsiao-Hsien, whose film Three Times received rave reviews in the United States, has repeatedly made award-winning films that have found acclaim in other countries but came and went with little fanfare in Taiwan.

The last of the these directors, Tsai, Ming-Liang, made his debut in 1992 with Rebels of the Neon God, a complex look at four people – three men and one woman - who seem uninterested in or powerless to change their loneliness and despair. Two of the men, Ah Tze and his friend, are petty thieves who break into telephones and take the coins inside. They do not have jobs, and when they aren’t committing crimes, they play video games or just lie down. Another, Hsiao Kang, drops out of cram school, not because he wants to do something else, but because doesn’t know what he wants at all. He does, however, have a certain amount of rage inside him that is just waiting to be unleashed. The last character is a young woman who works at a roller skating rink in the daytime and is part of a telephone dating service (although other activities do take place other than talking on the phone) in the evening. The characters’ chance meeting sets in motion a chain of events that will change them but not lead them to the answers they are seeking. At the end of the film, the characters are nowhere closer to finding a direction in life as they were in the beginning.

Tsai, Ming-Liang is a wonder at using subtle images to explain the personalities of his characters. For example, in the beginning of the movie, Ah Tze’s apartment has flooded, and instead of calling someone to fix the problem, he makes a half-hearted attempt to unclog the drain himself using a plunger. When that fails, he just walks through the water to his room and lies down. Later in the film, his scooter is battered, and his friend comes to pick him up. Instead of sitting behind his friend, he sits in front, for he won’t allow himself to be seen as needing someone’s help. At the end of the film, one of them lies wounded, and two of them ponder what to do with their lives, all the while standing in the water that is still flooding Ah Tze’s apartment.

The film takes place at a time when prostitution was still legal in Taiwan.

Tsai, Ming-Liang went on to make such films as Viva L’Amor, What Time is It There?, and Goodbye, Dragon Inn, all of which are interesting and well-worth watching.

*Rebel of the Neon God is currently unavailable on DVD in the United States. The out-of-print Region 1 DVD has yellow subtitles and an excellent translation. Region 3 DVDs do not contain English subtitles.
Posted by Azrael Bigler at 1:31 AM

Labels: 3 and a half stars, reviews, Taiwan, Tsai Ming-Liang