Review - Man of the Year 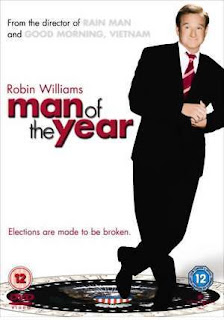 A few years ago, Chris Rock made a film called Head of State about an average guy who runs for president. At one point, his character says that he has to run for president his own way, so he dresses like a regular guy and goes on TNA Wrestling to drum up support. One of the signature moments of the film takes place at a fundraiser where rich, white donors and lobbyists dance to hip-hop. The film was a disappointment both critically and commercially partly because it couldn’t make up its mind whether it was a comedy or a drama. However, perhaps its biggest failure was that it didn’t convince the audience that people would vote for Chris Rock’s character.

Man of the Year is the latest movie about a non-politician running for president. The movie stars Robin Williams as Dobbs, the host of a TV show that is similar to John Stewart’s. One day, an audience member remarks that Dobbs should run for president. The Internet picks up on it, and soon millions of people are urging him to run. He obliges and after receiving 17% support in the polls is allowed into the final debate. He is the star of the debate, although not for the conventional reasons. All of this is in the first 20 minutes of the film.

The film imagines that a computer company has invented a way to ensure an undisputed winner. However, an employee of the company played by Laura Linney discovers that the program has serious problems and tries to warn her boss, who because of concerns for company profit doesn’t seem interested in fixing the problem. Dobb’s wins the election because of the problem. That’s not even half way into the movie. The movie is then concerned with what Linney’s character will do, and what Dobbs himself will do when he finds out he didn’t actually win the election.

The film is hit-and-miss. On the plus side, Robin Williams seems born to play roles like this. He has the perfect combination of comedy and drama, a man who makes jokes for a living but has serious concerns about what is happening in the United States. Williams is assisted by a very able supporting cast including Christopher Walken and Lewis Black, who delivers a great speech about the effects TV has on people’s perception of the world. However, the film gets bogged down in a storyline that is never quite believable. I never completely bought the attempts of company executives to keep the truth from coming out, and I had to wonder why no other election result was questioned. What about elections for the Senate and the House of Representatives? Did the program only err in one case?

To its credit, this movie does not ask its audience to believe that a TV comedian could be elected president. Dobbs’ campaign certainly would not have appealed to older more conservative voters. Instead, the movie asks viewers to believe that someone could be mistakenly declared the winner due to a glitch. In that way, the movie is a tale of morality. Is it morally acceptable to become president if you didn’t win the election but think you will be a good president? It’s an interesting question; however, in a Hollywood film, it’s not hard to predict what Dobbs’ decision will be.

Performances: 3 stars
Film: 2 and a half stars
Posted by Azrael Bigler at 1:30 AM