Review - The Three Faces of Eve 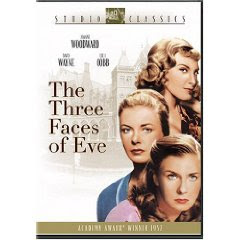 In 1957, The Bridge on the River Kwai took home the Best Picture award, and Sir Alec Guinness took the Best Actor statue. Best Actress that year went to Joanne Woodward for her complex and riveting performance of Eve White and her multiple personalities. Her performance is nothing short of amazing.

If the beginning of the film is to be believed, The Three Faces of Eve is based on a true story. Eve White and her husband go to see a psychiatrist about gaps in the women’s memory. As she undergoes counseling, it is discovered that inside Mrs. White is a women named Eve Black, who is the complete opposite of Eve White. While Eve White is quiet, Eve Black is boisterous. While Eve White is conservative in dress, Eve Black throws off her stocking and wears extremely low cut bright red dresses. While Eve White is a housewife, Eve Black is a night owl, spending hours singing, dancing, and drinking at night clubs. Her psychiatrist, who has no experience in dealing with this kind of condition, tries his hardest to reconcile Eve’s two personalities, but she continues to worsen, until at last a third personality emerges.

Her husband is at first supportive, but he quickly puts his own feelings of embarrassment before his wife’s mental health. He is a man who is quick to threaten violence when he can’t control what happens around him. He wants the traditional housewife but is drawn to the wild and free-spirited behavior of Eve Black, who feels free because as she says, she’s not the one who got married. Eve’s husband’s flawed character is contrasted with those of Eve White’s two psychiatrists, who show patience and determination even as Eve’s condition worsens.

It is hard to do justice to Joanne Woodward’s performance. She creates a distinct character for each of Eve White’s personalities, and the audience is never confused over which personality she is at any given moment. Mrs. Woodward changes her voice, her physical movements, and her personality for each character, and the result are astonishing. This may be one of the most impressive acting performances you’ll ever see. As if worried about the audience’s ability to understand which character she is at a given moment, the filmmakers added music to help explain which character Eve is turning into. When Eve turns into Eve Black, the music gets jazzy; when she turns back into Eve White, the music become calm and a little classical. Woodward’s performance renders this completely superfluous.

The Three Faces of Eve was released on DVD in Region 1 as part of the Fox Studio Classics series.

And I have to completely agree with your assessment of Joanne Woodward's acting in this film. I was impressed and moved by the book and eagerly awaited the film's release all those years ago. She did not disappoint!
I did nto know that the film had been rereleased on DVD.
A must get for me now!!

You go do that, Mom.