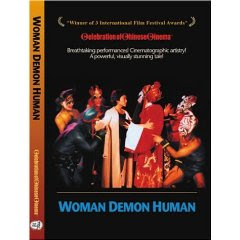 Don't be in Chinese opera if you're a woman. That's the advice a jaded father gives to his daughter when she decides that it is her life goal to become a great performer in Chinese opera. One could hardly blame him for counseling his daughter this way. After all, his wife ran off with a younger performer during one of their performances, causing him to be jeered and pelted with fruit and rocks and ending his career on the stage. The father continues, “You're either pushed around, or you lose your figure.” His daughter, Qui Yun, has a solution – she'll play male roles.

Qui Yun is a woman with two faces: one is of a woman determined to fulfill her dream, the second is of a woman afraid of the unknown. And Qui Yun has a lot to be afraid of. She is shunned and verbally assaulted by other children after her mother runs off with her lover, she is surrounded by audience members (both men and women) who want to know whether she is truly female by having her drop her pants, and her fellow performers spread rumors about her and plant nails for her to injure herself on during a performance. She is torn between fleeing her profession completely and becoming a farmer like her father and continuing to pursue her dream, no matter how arduous that pursuit will be.

The role of Qui Yun is played capably by three actresses: Gong Lin, Wang Feifei, and Xu Shouli. Each actress gives an impressive performance. Especially notable is Wang Feifei, who has the task of convincing the audience that Qui Yun is an able performer who has the necessary skills to not only act in traditional Chinese opera but also play roles not ordinarily given to women. In the scene in which Qui Yun takes to the stage after one of the cast members is too sick to go on, Wang Feifei accomplishes just that.

At its heart, Woman Demon Human is the story of a woman following in her father’s footsteps, even if her father isn't anxious for her to do so. Simultaneously, she is trying to prevent herself from becoming like her mother, whose legacy seems to follow Qui Yun everywhere, giving her enemies an ample supply of fodder for gossip and insults. Her triumph, while a bit predicable, is actually uplifting. The movie is damaged a bit by its odd final scene, in which Qui Yun has a conversation that can only be happening inside her head. The audience is expected to believe that such a conversation could resolve years of doubt and fear, and it simply isn't believable. However, it is a minor quibble in an otherwise interesting and well-crafted film. (on DVD*)

*Woman Demon Human was released as part of 2001's Celebration of Chinese Cinema series, which includes films such as Rickshaw Boy, New Year Sacrifice, Country Teacher, and Red River Valley. The disc includes an advertisement for the series which proclaims that the films have been digitally remastered. However, the films in the series lack the picture quality of other remastered films. Three important scenes in Woman Demon Human are almost impossible to see clearly. In addition, towards the end of the film, the subtitles begin to contain a high number of grammatical errors and misspelled words; at one point, the subtitles even start to slide off the screen and are therefore difficult to read. The disc I have also has significant audio problems in the final scene.
Posted by Azrael Bigler at 5:33 AM

Labels: 3 and a half stars, China, reviews