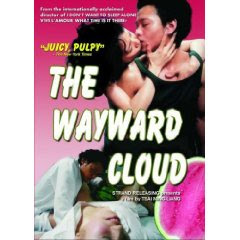 Much has been written about The Wayward Cloud, some of it not positive. The criticism seems to revolve around two aspects of the film, the film’s use of pornography – sometimes graphically shown – and its musical numbers, which allow the characters to sing the emotions that they seem unable or unwilling to give voice to, but which many, myself included, felt were unnecessary. Some reviewers have written that the ending was disconcerting; others have said that it was not as appalling as they thought it would be. Perhaps Tsai Ming-Liang had this diverse reaction in mind when he crafted the film the way he did.

The Wayward Cloud begins with an unsettling image of a woman in a nurse's uniform lying on a bed with her legs spread open. In between her legs is a watermelon. A man enters and begins to lick and fondle the watermelon, as the women gyrates and moans. One scene later a woman is watching a news report explaining that watermelons are being used as symbols of relationships. According to the news report, if a man gives a woman a small watermelon, it means that he is in love with her. One may ask why people don't just use words to convey this message, but like other films by Tsai Ming-Liang, words are hard to find.

At the same time, Taiwan is going through a drought, and the government is urging people to conserve water. Some politicians even appear to be using the shortage as a political tool. They can be heard holding rallies at which they chant, “Do you want rain?” as if they had the power to bring it. At the same time, ants appear to be infiltrating people homes and clothes. It is as if Taiwan is under attack from nature. I took this to mean that people were unable to wash away both their physical and moral filth. In another scene, a woman is seen standing on top of a pan trying to capture the live crabs that she bought for dinner after they fell on the floor. She is deftly afraid of being bitten by one of them, similar to the way many people have felt regarding sex after the discovery of HIV and AIDS.

The film's final scene, in which Hsiao-Kang's secret is revealed to Shiang-Chyi, is difficult to adequately describe, and perhaps it's best for the viewer to experience it without any prior warning or hint. However, that anyone could see the actions in the final scene as anything but a violation of two women surprises and disturbs me, which may be what Tsai Ming-Liang is getting at with this film, that pornography and wild physical acts of affection, rather than actual expressions of love and romance, have blurred the line between what is acceptable - even normal - and what is shocking. (on DVD)

Warning: The Wayward Cloud is not a movie for children and may in fact be shocking for some adults. It includes some very graphic sex scenes, as well as a musical number containing the lead actor dressed to look like a phallic symbol.
Posted by Azrael Bigler at 5:29 PM