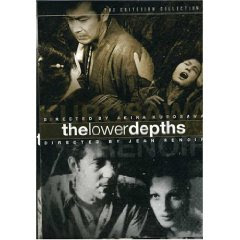 There is a moment in Jean Renoir’s The Lower Depths that seems to sum up the entire picture; in it, an elderly man named Louka asks rhetorically, “How can we pity the dead when we have no pity for the living?” Louka is one of the residents of the Lower Depths, an impoverished area of France. With him are a number of interesting and tragic characters, such as an alcoholic actor, a woman obsessed with romance novels who may or may not have been passionately loved in the past, a former typist, a shoe repairman who is charged extra because he actually works, and numerous others who seem to fritter away their days gambling.

One of the residents of the Lower Depths is Pepel, played exceptionally by Jean Gabin. Pepel is a thief with a life that makes some of the wildest soap operas seem tame. Pepel has an agreement with his landlords; he steals things, they buy them from him and sell them for a profit. He is also having an affair with Vasilissa, one of his landlords. Vasilissa is the kind of person who can be sweet one moment and threaten your very livelihood in the next breath. In one scene, she watches, almost happily, as Pepel almost strangles her husband for calling her a tramp, never even trying to intervene on behalf of either man.

While trying to steal valuables from a wealthy mansion, Pepel happens to meet a baron, played by Louis Jouvet. The baron, instead of being angry at being robbed, seems to be delighted to have company, and he and Pepel spend the entire evening eating, drinking, and playing cards. It is the start of a unique friendship. The baron, as it turns out, has lost everything gambling, and soon, he joins his new friend in the Lower Depths. Meanwhile, Pepel has fallen in love with Natasha, Vasilissa’s sister. Taken advantage of by her sister and her husband and fearing that she will never leave her impoverished setting, Natasha notices something worthwhile in Pepel, even if she doesn’t trust him enough to say so. One day, as he and the Baron are talking, Pepel says that all he wants is for someone, preferably Natasha, to believe in him and to love him enough to help him change into an honest person. However, getting his wish may be a lot harder than he thinks.

The Lower Depths is as much a love story as it is a story about lost dreams. Every character has a reason for being there, a past that contributed to their fall from society. The baron, the actor, Vasilissa’s husband Kostylyov, all of them wanted more for themselves, and more importantly, all of them have been abandoned by society. In response, as Louka says, they turn their backs on everyone else. Only Louka attempts to keep the dream of paradise, be it earthly or heavenly, alive.

Gabin and Jouvet are truly a wonder to watch. They have an easy rapport, and their dialogues are filled with interesting observations about life. In one scene, they are lying under the sun, talking the day away when the baron (Jouvet) makes a fascinating observation of his life. It seems to have been a series of uniform changes, and he cannot remember much else. Matching him, Pepel (Gabin) remarks that when he was growing up, it seemed as if everyone, in particular his father, had wanted him to be a thief and that if one person had told him not to, he would have turned out differently. Seeing which one of these two likable characters will find his way out of the Lower Depths and which one will be changed by it proves to be both mesmerizing and surprising. (on DVD from Criterion Collection)

*The Lower Depths was released as a set with Akira Kurasawa’s 1957 version of The Lower Depths. While I prefer Kurasawa’s somewhat darker vision of Maxim Gorky’s play, they are both unique interpretations that deserve to be seen.
Posted by Azrael Bigler at 5:14 PM

Labels: 3 and a half stars, France, Jean Renoir, reviews