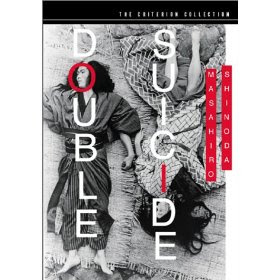 Perhaps it is his delusions of grandeur that makes a weak man appealing, the side of him that says, “I have failed before, but this time – with you – it will be different.” Perhaps it is the belief that fate, which seemed to have dealt him a horrendous hand, finally seems to be smiling upon him, for he has met the woman of his dreams, and now nothing can stop him. If only life - and love for that matter – were that simple.

When we meet Jihei, he is in a situation that can only end badly. He runs a paper business that is not successful, is married to his cousin, has two children, and is seeing a courtesan named Koharu, whom he has promised to “redeem.” As the story unfolds, Jihei is a beaten man, without the means to free Koharu and without the will power to quit her. Weakened and near tears, Jihei and Koharu lose themselves to love. He bites her finger; she enjoys it. As their rapture begins, she cries out that they should die together. Jihei responds as if it would be an honor to do so with her.

In truth, Koharu does not wish to die. In debt as well as responsible for her elderly mother, she knows she has responsibilities; however, she also loves Jihei and does not want him to be unhappy. A chance encounter with a samurai offers her a way out. Confessing her plight to the samurai, she begs him to take her as his courtesan, explaining that if he does, Jihei might return to his wife and forget her. The samurai turns out to be Jihei’s brother in disguise, and he and Jihei interpret Koharu’s willingness to take him as a customer as proof of her moral curruption, completely missing the sacrifice that she was prepared to make. Jihei responds in the manner of an immature child, cursing and blaming Koharu for ruining his life and simultaneously exonerating himself of all responsibility for his infidelity and vowing never to see her again. If only love and obsession could so easily be let go of.

Double Suicide is several movies in one, and each is fascinating. It is first the story of an affair that Shakespeare would appreciate. In addition, it is also the story of the bond that exists between women, even those that have never met and are competing for the same man. While Jihei’s wife Osan can’t stand the fact that her husband has had an affair, she also cannot allow harm to come to Koharu, especially if it is partly because of her. The film is also about the effect that Jihei’s actions have had on his wife. In one scene, she relates her misery to her husband as he lies in a fetal position after learning that Kohura may be marrying someone else. Osan and Koharu are truly the victim of this movie. Osan has had to tolerate a loveless marriage, in addition to having had to shoulder the responsibility for running both the household and business alone. As for Koharu, she is powerless to change her fate. As an older women explains it, Koharu is not free to choose or love. To make matters worse, in one scene, she is forced to listen to a suitor verbally rip the man she loves to shreds.

Yet Double Suicide contains a mind-bending twist, one that is not completely explained. This twist involves the presence of what appear to be stage hands for a Bunraku puppet play. Dressed in black, they are present in every scene, removing props, assisting characters in daily chores. However, they appear to have a much deeper role. It may be that they are controlling the actions of Jihei and Koharu. For instance, in the beginning of the film, time appears to stand still. Yet in the frozen maze of mannequin-like figures move two figures – first one dressed in black and following behind him - almost as if he is in a trance – Jihei. Their destination is Koharu’s room. As the film progresses, these shadowy figures play an important, pivotal role in the tragedy that unfolds.

Equally puzzling is the opening narration. Two people – perhaps a writer and a director – are discussing a performance, while on the screen puppets are being assembled and rehearsed for a performance. The two voices, which are never heard again after the opening scene, appear to be discussing the final scene in either a movie or a performance. All that is clear is that the final scene involves a suicide. Is the whole movie therefore a performance? Is the performance an adaptation of what unravels on screen? Are the voices somehow related to the figures in black? The movie leaves those and many other questions unanswered.

In doing so, Director Masahiro Shinoda has created a tragedy that fascinates and saddens simultaneously. He has also created a masterpiece that demands to be seen again. (on DVD from Criterion Collection)

*Double Suicide is in Japanese with white English subtitles.
Posted by Azrael Bigler at 11:26 PM