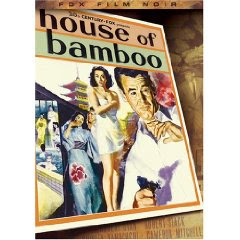 Towards the middle of House of Bamboo, I let out a heavy, disappointed sigh. It came during a scene in which Mariko, a recently widowed woman, is massaging “Eddie Spaniard,” an undercover soldier investigating a robbery-murder in 1954 Japan. When asked how she learned how to give such an excellent massage, she replies, “In Japan, a woman is taught from childhood to please a man.” Eddie replies that it’s a great tradition.

It is not just that the dialogue is poorly written that caused this reaction; rather, it’s the stereotype that it represents, a stereotype that, it should be said, was not uncommon at that time the film was made. Movies such as Love is a Many-Splendored Thing and Sayonara perpetuated the belief that Asian women inhabited a restrictive world, but could – if they had the strength to break with tradition - find true happiness in the arms of a foreigner. House of Bamboo is no different in this regard. In fact, Mariko finds “paradise” not just with her first American husband, but also with Eddie. At one point, she even rails against the culture she was born into because it doesn’t understand her and allows people to misunderstand her noble intentions.

House of Bamboo begins with the robbery of a train carrying military supplies. One American and a number of Japanese soldiers are killed. Because of the nationalities of the victims, the robbery is investigated jointly by the Japanese police and the American army. American army officials discover a connection between the robbery of the train and a previous robbery. In each case, the same rare gun was used. They question Webber, one of the robbers from the earlier robbery, but he proves to be no help, refusing to answer any of the officers’ questions (in his defense, he is questioned as he is near death and undergoing surgery). The interrogation does uncover the young man’s secret marriage to a Japanese woman, but he goes to the grave insisting that she knows nothing about the crime.

Enter Eddie Spaniard, a man with a criminal past and a connection to the young criminal. He arrives in Japan and immediately set outs to find the young man’s wife. His methods are unconventional to say the least. He wears a jacket that is too big for him, intrudes upon rehearsals for traditional Japanese performances, asks questions loudly, as if his English will be better understood if he yells the words, and tackles Mariko when he finally finds her. However, none of this stops her from suddenly opening up to him when he furnishes a picture of him with her late husband. Eventually, Eddie Spaniard’s identity is revealed, and he enlists Mariko’s help in finding out who stole the weapons from the train. She agrees to help, as that discovery will also reveal who was responsible for her husband’s death.

House of Bamboo is a mixed-bag. On the one hand, the film is stunning to look at. Director Samuel Fuller uses bright colors throughout to illustrate the beauty of Japan. The film was shot entirely on location, and therefore, it has an authenticity lacking in many films taking place in Japan but filmed on a studio lot. For instance, the opening scene of the train robbery takes place against the backdrop of snow-capped Mt. Fuji. Later scenes occur in fishing and market areas that are bustling with people. In these scenes, Fuller uses wide, long shots to give the audience a clear view of 1950s Japan. Also of interest are the villains. They are not Japanese mobsters, but rather former American soldiers who, after being discharged from the army, turned to extortion and crime. As they explain it, doing so is easy in Japan because of the nature of the Japanese people themselves. As the leader says, they don’t even have to use guns.

And there is the biggest problem with the film – its portrayal of the Japanese characters and the way the American characters contrast with them. While the Japanese cops are said to be trigger-happy, the American army is said to be cautious. While Japanese managers can easily be blackmailed into paying “protection” money, Americans are tough and innovative, using traditional Japanese society to their advantage. Moreover, the Japanese culture is portrayed as being an obstacle to happiness and justice, as Mariko’s life is made unbearable by her neighbors due to her decision to pretend to be Eddie’s “Kimono,” a term used to describe Japanese women throughout the film.

In the end, House of Bamboo is a curious disappointment. While it opens with promise, it quickly devolves into two standard stories, the first involving an undercover agent who penetrates a crime ring and causes distrust among its ranks, and the second having to do with the budding love of two people from different backgrounds. Unfortunately, neither element deviates from the normal, predictable pattern that audiences have come to recognize as commonplace in Hollywood films. Perhaps when the first was initially released, these conventions were less predictable. Certainly, seeing an interracial relationship was something new when this film was made. However, viewed from a 21st century perspective, the film is simply predictable and stereotypical. (on DVD)