Review – Story of a Love Affair 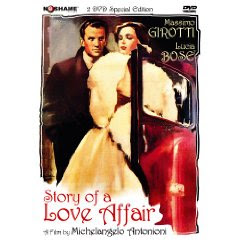 Some questions should never be asked; some doors to the past should never be opened. Yet jealousy has a way of making a man do both. Enrico Fontano is a successful businessman with a beautiful wife named Paola, a woman who has never given him reason to distrust her. However, as his wife, she is the host and the invitee of countless parties where she is the envy of many women and the object of many men’s admiring stares. It is enough to drive Fontana to hire a private investigator to look into her past and discover whether she is the type of woman to be unfaithful. His inquiry has an unintended consequence; it reunites two people whose meeting can only bring disaster.

A shroud of mystery surrounds their first meeting. What is clear is that Paola had had two good friends when she was younger. One of them is dead; the other is not close to Paola anymore. It is revealed that Paola had been in love with her deceased friend’s fiancé, Guido, and had pursued him vigorously to no avail. However, two days before they were to have been married, her friend had died after falling into a broken elevator shaft. As both Guido and Paola were present and unharmed, the detective wonders if the death could have been the result of foul play. Paola’s surviving high school friend seems to have her own suspicions, but her loyalty to her former friend compels her to warn Paola and Guido that a detective is asking questions about them. Thus, after six years, Paola and Guido are reunited.

Story of a Love Affair could have been called Story of Two Love Affairs, for it is possible that Paola and Guido had an affair in the past as well. Guido was about to be sent to war, and in that situation, it is not unheard of for people to make decisions that they later regret. However, after their friend’s death, they fled from each other, perhaps reeling from the realization that their feelings for each other may have inadvertently contributed to the death of someone dear to both of them. Six years later, their feelings are just as strong, and just as deadly. Soon they are swearing their love for each other and trying to figure out a way to be together. It is not long before one of them suggests that Enrico be removed from the picture.

It is interesting to note the differing positions of Paola and Guido. Guido is a car salesman, and not a very successful one at that, while Paola is steeped in wealth and luxury. Whereas Guido struggles to make ends meet, Paola has just to ask for her husband to buy her an expensive car. Paola, therefore, wields great power over Guido - she can financially support him, arrange for her husband to buy cars from him, and leave large sums of money in his wallet. Paola also reels Guido in with her sweetness and sadness and then throws verbal darts at his manhood. It is only a matter of time before Paola has Guido going along with her suggestion, and yet one wonders if this is done intentionally or subconsciously, if it’s planned or simply the consequence of two people who bring out the best and the worst in each other reuniting.

Story of a Love Affair is a noisy film. Everywhere characters go they hear the sounds of everyday life - planes flying overhead, elevators clanging, crowds bustling, and phones ringing. The effect of this is to strip Guido and Paola’s meetings of the romantic sentiment that the audience would feel if a violin played in the background and remind the audience that what is going on is an affair, not a romantic interlude between two characters that have a bright and happy future together. An interesting result of this is that Guido and Paola are constantly aware that they are not alone, and their meetings have a sense of desperation to them, for they are meetings that, quite simply, should not be happening. It is, therefore, fascinating to note what caused them to come together again in the first place and who the ultimate victim of their reunion is. (on DVD)

*Story of a Love Affair is in Italian with white English subtitles. It was the debut film of legendary director Michelangelo Antonioni.
Posted by Azrael Bigler at 7:47 PM

I like your synopsis, especially how you found an unanswered question or two buried in the plot. Also, you found a twist in this melodrama—which was filmed under the influence of the then-current neorealism movement—with the noisy streets of Milan actually affecting the movie couple when they want to be alone. In a typical movie, such matters as background noise never become a factor.

I have some further observation about Antonioni’s first big movie, which I think holds up with his famous, unmelodramatic 1960s work.

As with his later movies, Antonioni shows the plot in the barest terms, leaving conventional detailing outside of the storyline. As you pointed out, some seemingly fundamental questions are left unanswered. Here are some more: did or did not the couple kill his fiancé? Is her husband’s death accidental or suicidal? Will the investigator's suspicions lead to the couple’s arrest?

To Antonioni, these are issues that are beside the point he wants to make. For Antonioni, what we viewers should come to understand is that this couple had passion for each other that was destroyed by the murder in their hearts. This is the territory of Antonioni’s existentialist interests—how passion makes life worth living and how passion is lost through self-centered recklessness.