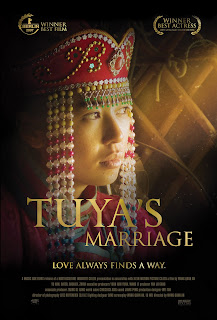 As Tuya’s Marriage begins, two children are fighting. One has insulted the other by saying that he now has two fathers. Tuya, still wearing her traditional marriage attire, tries in vain to separate them. Tears beginning to flow down her checks, she is overcome with sadness and finds a place where she can hide and weep in solitude. Something has clearly gone wrong.

Tuya’s Marriage may be the first movie in which characters who still love each other talk openly about the economic benefits of divorce. It is a terrible thought, but one that for these characters has a tragic sense of logic to it. Tuya is a young Mongolian woman who ekes out a living by raising sheep in the middle of the Mongolian desert. Her husband Baolier has been unable to work since being injured while trying to dig a well. His injury means that Tuya has the responsibility of both managing the house and earning the family income. However, the years of toiling and hauling water have affected Tuya physically. After helping a friend get out from under a truck that had flipped on its side, she collapses and has to be taken to a hospital. The doctor tells her that she shouldn’t do manual labor anymore because if she does, she could end up like her husband. Upon hearing this, Tuya’s sister-in-law, a widow with six children herself, suggests that Tuya divorce her husband, not because their marriage has deteriorated, but because Tuya could then find a husband who could work and take care of her and the children. It would be a trade-off, love for economic and physical security. Tuya, after initially opposing the idea, eventually consents; however, she insists that she wants to take care of Baolier even after she remarries. Furthermore, anyone wanting to marry her must allow Baolier to live with them, a condition that she is told would cause great embarrassment for her new husband. This condition does not deter possible suitors, as in one day six arrive to propose to Tuya.

Tuya has a neighbor named Shenge who is married to a materialistic, unfaithful woman. He is indebted to Tuya for helping him during his worst moments (usually when his wife has run off with another man). During these moments, Tuya is rather unsympathetic. In one scene, while a drunken Shenge is lamenting the disappearance of his wife, Tuya tells him bluntly that his wife is with another man and that he should divorce her. Later, when Shenge tries to give her three sheep to make up for three that were lost while she was helping him, Tuya refuses to accept them; in addition, she orders her son not to speak to Shenge, seeming to want her family to have no part of him. Yet there is a tenderness underneath this that comes out more frequently after Tuya’s diagnosis. She tries to help him financially when his truck disappears, and later Shenge decides to complete the well that Baolier was injured building. Baolier later describes this act as Shenge’s marriage proposal.

It is hard to know what drives Tuya’s suitors. Men come from the city to propose to a woman they have never met; moreover, a former classmate of Tuya’s comes to propose to her, saying that he has waited seventeen years for this opportunity. Are these men desperate? Are there an insufficient number of women in Mongolia? Is Tuya so different from other women that men would flock from all over for the chance to become her second husband and the stepfather to her two young children? The movie does not directly answer this question. However, each of her suitors is presented respectfully, and the audience has not reason to doubt the sincerity of each one of them, regardless of their individual reasons for proposing.

Tuya’s Marriage has a certain degree of predictability, which is not necessarily a bad thing. As Tuya and Baolier calmly discuss which suitor Tuya should marry, a part of me wanted to pull Baolier aside and ask, “How can you be so detached about this? Don’t you understand what this would mean?” The answer is obvious. Of course, he does. However, what one says and how one acts during a hypothetical discussion are often dissimilar to what one says and how one acts in a real situation. Having seen the events that transpire at the wedding at the beginning of the film, it is both intriguing and saddening to see the events that are leading up to it. (on DVD in Region 3)

*Tuya’s Marriage is in Mandarin Chinese with white English subtitles. The Region 3 DVD has several spelling, punctuation, and grammatical errors. They do not hinder the viewer’s ability to understand and appreciate the film.
Posted by Azrael Bigler at 3:44 AM