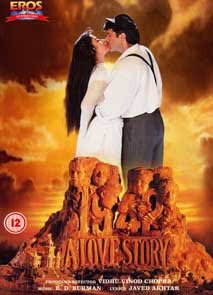 It is easy to understand why Vidhu Vinod Chopra's 1942: A Love Story would be a hit in India. Full of nationalistic sentiment, the film radiates with vitality and shows Indians as controlling their own fate and seizing their country back from the forces of imperialism. In addition to their country being a British colony in 1942, Indians were increasingly being asked to fight for the British in a war that many Indians did not feel was theirs. The people of India had had enough, and as the film demonstrates, chants of "Love live India," "Do or Die," and "Quit India" reverberated throughout the country.

Into this changing world steps Naren Singh, the son of a powerful official in the British-controlled government. Naren is filled with the sense of justice that his father lacks. While his father cares little for those of the lower caste, Naren empathizes with them. In one scene, a soldier hits a protesting child with his gun when the boy dares to raise the Indian flag at a rally. Naren rushes to his defense, using his own body to protect the boy from further harm. At the same rally, Naren sees a beautiful woman on a bus after the violence occurring around them causes the window next to her to shatter. Naren is awed by her beauty, and it is, of course, love at first sight. While this is happening, a secret group of revolutionaries are plotting the assassination of General Douglas, the man they blame for the brutalization, murder, torture, and rape that has ravaged their country. If this seems complicated, a few scenes later it is revealed that Naren is an actor and is in a play that is to be performed in front of General Douglas before he returns to Britain. Which play is it, you may ask? It is none other than "Romeo and Juliet." Ah, but we know who Naren's real Juliet is. So basically what we have is a political thriller mixed with Shakespeare and a love story replete with musical numbers (and there are many of them). We even have two warring factions much like those of the Montague's and the Capulets.

1942: A Love Story is a tale of two halves: the first mostly details the budding romance between Naren and Rajjo (as the subtitles refer to her), the woman on the bus and also the daughter of a revolutionary; the second primarily has to do with revolt. Together, they are an odd puzzle. In the first half, Naren tries to woo Rajjo by - for lack of a better term - annoying her. He arranges to be in a library alone with her and during his introduction of himself talks her ear off, refuses to let go of her dress until she tells him her name, and pulls on her scarf until it begins to unravel. He does this so well that by the end of the song, Rajjo appears to have taken a liking to him. Later, he'll recite Shakespeare to her and even climb her balcony, just as Romeo did when he wooed the lovely Juliet. Soon comes a proposal of marriage set to music. Mixed in between these scenes are shorter snippets involving assassination plots and unarmed Indians being gunned down by police officers on horseback. If this seems an odd juxtaposition, the characters are aware of it, with some characters arguing that love cannot come until freedom does and others of the opinion that freedom can only come to a country that already has love.

The second half of the film contains fewer musical numbers and more political intrigue. Plots are discovered, sacrifices are made, and changes are undergone. While the first half seemed light-hearted and a bit simple-minded at times, the second half pulsates with an energy and pace that many actions films would envy, especially with the appearance of Shubhankar, the man chosen to be General Douglas' assassin. Together, Shubhankar, Naren, and Rajjo join together to create an intense final act that is an impressive piece of filmmaking.

Put together, these two halves create a film that gets better as it goes along. I felt the first half was a tad bit too silly, but the silliness does indeed serve a purpose. It allows the viewer to clearly see the change that Naren and Rajjo undergo and also the dangerous world in which their love takes shape in. The film's final moment is filled with hope, hope that the future will be bright, that India will be united and peaceful. If only this had been true. Soon, India would break into civil war and eventually be divided into two countries. More than 50 years later, this divide has yet to be mended. However, for a moment, as the Indian flag is raised and saluted at the end of the movie, Naren and Rajjo have the outcome they sought, for they have both their country and their love. It was indeed possible after all. (on DVD)

*1942: A Love Story is in Hindu and English with English subtitles.

*The DVD I watched did not have English subtitles during the musical numbers. This is also true of the DVD for Parinda, both released by Eros International.
Posted by Azrael Bigler at 5:40 PM