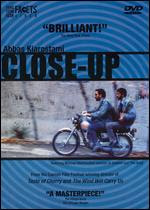 1989 was an important year for me when it came to my interest in acting. That year heralded the release of Steven Soderbergh’s Sex, Lies, and Videotape, a film that shocked and riveted me. Seeing James Spader’s emotional portrayal of Graham reinforced my drive to be an actor, for I wanted to act in films like that and give virtuoso performances like the one James Spader delivers. That same year, on the other side of the world, Iranian director Mohsen Makhmalbaf’s film The Cyclist opened. It had an enormous effect on a man named Hossein Sabzian. A year later, Sabzian would find himself in court, accused of perpetrating a fraud by impersonating Makhmalbaf and possibly planning to commit burglary. Abbas Kiarostami’s Close-Up reunites the defendant and his accusers to tell one of the most haunting stories you’re likely to ever see on film.

Close-Up begins with an odd sight of a journalist and two police officers getting into a taxi. The journalist has been alerted to a big, sensational story, the kind that gains journalists notoriety. As the cab approaches its destination, it comes to the end of a road. The journalist notes that it seems as if a story is coming from a “dead end,” an observation that accurately describes Sabzian’s situation, for at that moment, he has come to a point in his ruse when only one outcome was likely. Even he knew it. A moment later, the journalist reveals Sabzian’s ruse, and the police officers take him into custody.

Much of Close-Up takes place in a small courtroom, where Sabzian explains his actions to the judge, the family he deceived, and the director himself. However, the film is nothing like other contemporary films in this genre. Sabzian does not swindle people out of millions of dollars as the lead character in Catch Me If You Can does, nor does he discover hidden interests and talents as the man pretending to be Sidney Poitier’s son does in Six Degrees of Separation. Sabzian, it appears, was not after wealth; he was not after the quick fix that crime sometimes affords people who engage in it. And it is this difference that makes Sabzian someone that affects you long after the credits have finished.

Just as Americans turned to motion pictures to ease the pain and disconnect that they felt during the Depression, Sabzian turns to movies after the promise of the Iranian Revolution fades. Unable to find steady work, powerless to save his marriage or take care of his children, he finds a sense of solace and truth in the films of the time, in particular those detailing the struggles of the poor and innocent. It is pure coincidence that he bears a striking resemblance to the director of The Cyclist, but because of that, he is often mistaken for him. Seeking reprieve from the daily reminders of his poverty and unemployment, at one point he stops correcting people’s misperceptions. Who can blame him? As Makhmalbaf, he is looked at with respect. People are honored to have him over for dinner. They ask him for his autograph and freely give him their phone numbers. Who wouldn’t want that? The problem is that feelings of importance can be addictive, and it is often hard to stop a deceit once one is begun. As the film came to a close, I found myself greatly worried about Sabzian. Having seen his emotional, sometimes lost expression for an hour and a half, I wanted some reassurance that everything had turned out well for him. One was not forthcoming.

Sabzian’s victims, the Ahankhars, are a family that fate has dealt a slightly better hand to. Having stayed together as a family, they have been able to weather the storm and come out in a better position financially. However, like Sabzian, something is missing from their lives – the feeling that they too matter in contemporary Iran. Sabzian gives them this impression, for as Makhmalbaf, he conveys the message that they are of great consequence, that they are talented, that they are worth immortalizing. In essence, the deceit empowers all of them - for a time. (on DVD)

*Close-Up is in Persian with English subtitles.

*The film was listed as one of the A List 100 Essential Films by the National Society of Film Critics.
Posted by Azrael Bigler at 9:06 PM

Labels: 4 and a half stars, Abbas Kiarostami, Iran, reviews