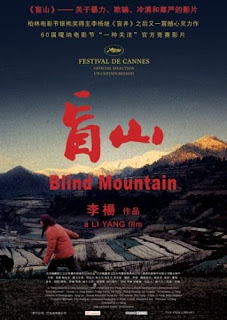 Towards the middle of Li Yang's powerful Blind Mountain, an elderly woman looks at her "daughter-in-law" - and I use that term very loosely - and remarks that she's been eating more lately. Suspecting that the young woman, Bai Xuemei, may be pregnant, she feels her stomach. Bai Xuemei immediately pushing the woman's hand away, and upon inspecting it herself, she begins ferociously beating her stomach and sobbing uncontrollably. Her "mother-in-law" implores her to stop, even suggesting that Xuemei hit her instead. She cries out, "We will always be grateful to you." Perhaps some explanation is in order. This woman, who now proclaims her gratefulness, is the same woman who, along with her husband, paid $7,000 to have Xuemei duped into coming to the countryside. She is the same woman whose family locked Xuemei up to prevent her from running away. More alarming, she is also the same woman who - along with her husband - held Xuemei down so that her son, Xuemei's "husband," could rape her. And now she will be thankful to Xuemei for enabling the family name to live on. Calling the statement disturbing is putting it mildly.

Blind Mountain takes place in the early 1990s in northern China. It is an area of scarce economic development, harsh tax rules, and an incredible amount of indifference to the suffering of others. It is also a land at risk of future extinction. The village appears to have roughly ten school-age children, and of those ten, only two are girls. It is a land that is dependent upon the physical labor of its residents, and a preference for male children exists for that reason. Here, it is not uncommon to find the body of a female infant floating in the waters nearby. In addition, most of the villagers are illiterate and see no practical use for such skills as reading. There is one school, and parents must pay to send their children there. The school's teacher himself only has a high school diploma.

In trying to help her parents out of debt, Bai Xuemei becomes a victim of the villager's callous apathy. People speak of her as if she is a piece of commerce. They mock her tears and couldn't care less whether she is a willing participant when it comes to sex. In fact, Degui (her "husband") is advised to have his way with Xuemei quickly because it will make her less likely to try to run away. Others are just as uncaring as Degui's friends. For instance, a store owner asks him about the wedding night and about the size of Xuemei's breasts, a village chief promises to look into her case but does nothing, and a government official hears Xuemei screaming for help and advises Degui to "control your woman."

However, through all of it, Bai Xuemei remains steadfast. While other kidnapped brides have abandoned any hope of running away, Xuemei's desire to flee never extinguishes, not even after rape, beatings, and failed escape attempts. She is constantly vigil for opportunities and studies her surroundings, ever determined to find that perfect moment to flee. Her courage and determination are inspiring, and as long as she is not beaten, the viewer can continue to watch her deplorable situation because maybe, just maybe, her next flight for freedom will yield success.

When Xuemei gives birth to her son, the camera shows his "grandmother" smiling and making gibberish sounds to evoke giggles from the newborn. She clearly loves the child. It was enough to turn my stomach. And yet, as difficult as it is to say this, I felt a bit of sympathy for the villagers. Faced with the end of their family line, viewed as essential in the Chinese culture, and surrounded by corruption - local doctors refuse to treat patients unless they are paid first - they embrace an action that most everyone would recognize as wrong instantly. They allow themselves - either out of ignorance or intentional delusion - to believe that the kidnapped women are the real villains and that their needs somehow justify their treatment of these women. The local teacher chalks all of this up to their lack of education, but lack of education alone does not account for someone not recognizing the sufferings of others. The inability to acknowledge someone's agony and respond to it appropriately is the result of a multitude of factors and takes years to acquire, and the fact that the village has this collectively implies that they too were victims of someone else's misdeeds and coldness.

Blind Mountain is not easy to watch; however, it is a compelling film that will stay with you long after the credits have finished rolling. (on DVD)

*Blind Mountain is in Chinese with English subtitles.
*Blind Mountain was released on DVD in the United States on January 6, 2009.
Posted by Azrael Bigler at 9:36 PM

Labels: 3 and a half stars, China, Li Yang, reviews