Review – Within Our Gates 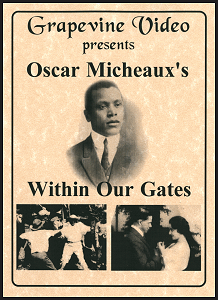 Few films have as many elements and plot points as Within Our Gates. The film contains no less than thirteen pivotal characters and touches on several pertinent social issues. Historically, Within Our Gates is the oldest known feature-length film directed by an African-American. The film’s central character is Sylvia Landry, brilliantly played by Evelyn Preer. As the film opens, Sylvia, a school teacher from the South, is in the North visiting a cousin. We learn that Sylvia has recently accepted a proposal of marriage from a man named Conrad Drebert. In a letter, he makes his joy at her acceptance known. However, their future happiness is imperiled by the fact that Sylvia’s cousin Alma is also in love with Conrad, and when the opportunity presents itself, she devises a scheme to ruin their romance. Sylvia is also being pursued by Alma’s stepbrother Larry, a member of the underworld and a man who is known as “The Leech.”

With her engagement over after Conrad’s fit of jealous and extremely brutal rage, Sylvia decides to return to the South. Upon returning, she goes to work for Reverend Wilson Jacobs, the founder of a school for African-Americans. In spite of the school’s efficacy and good-intentions, it suffers greatly due to a lack of funding and is in danger of closing. Therefore, Sylvia decides to return to the North in an effort to raise enough money for the school to remain open.

So far, I have made this plot seem very simple. However, it is in fact far from it. Present-day sentiments make parts of this film difficult to watch at first. After all, what are present-day audiences to make of an intertitle that describes the Reverend’s sister as his “companion against the Negro’s ignorance”? And yet a moment later an African-American, deprived of an education by his state, arrives and relates to the Reverend his tough decision to give up everything just so his daughter could have the opportunity to be educated. The intertitle was referring a lack of formal classroom education, but that may not be the first interpretation that people have.

Another aspect of the film that sets it apart from others of its time is its evenness when it comes to heroes and villains. As in real life, they come in all genders and colors. For example, the man who attempts to rob Sylvia when she arrives in Boston is African-America, but then so is the man who prevent the robbery. Later the film introduces Mrs. Geraldine Stratton, a rich, white Southerner who smiles when she reads about a proposal to strip Blacks of the right to vote. However, we also meet Mrs. Evelyn Warwick, another rich white women but one who is sympathetic to Sylvia’s cause and may in fact be the only person who can save Sylvia’s school. I must admit though that I felt some sympathy for Mrs. Stratton. It’s hard to know what to make of someone who would deny her own right to suffrage just to keep African-American women from having that privilege.

Other characters are equally complex, and because of that, they may make some viewers uncomfortable. For example, the film introduces an African-American preacher named Ned who has the endorsement of Mrs. Stratton because as she explains it, he will “keep coloreds in their place.” More troubling is the fact that Ned stands in front of his congregation and tells them not to want equality in this life, for their reward will come in the afterlife. As he explains it, Whites will go to Hell because they have everything in this life. To make matters worse, Ned then goes to visit to white officials who ask him why Blacks cannot be content with what they have. Ned’s answer seems to suggest that they should be. To add insult to injury, one of the men then kicks Ned as he is leaving. Ned turns around and laughs with them. Once outside the office though, the smile disappears, and Ned reveals the shame that he feels at his actions. But realistically, what are his options? To stand up for himself and his race is to risk being lynched.

The last act of Within Our Gates reveals Sylvia’s youth and through this story, the danger of the time is made crystal clear. It is a time when the affluent took advantage of the poor and the uneducated, when all it took was the words of a drunken fool to set a mob against an innocent man and his family, when some whites felt they could attack African-Americans with impunity. This is the world in which Sylvia grew up, and it is clear that it has taken a toll on her. That said, the film’s final moments, in which Dr. Vivian tries to explain to Sylvia why she should be proud of her race, rings hollow. After seeing the effort she makes to save Reverend Jacob’s school, it’s clear to me that she doesn’t need a speech to instill her with pride or to give her the courage to begin a new chapter in life. That said, she certainly deserves one. (on DVD)

*Within Out Gates was released as part of Image-Entertainment’s 3-disc collection Origins of Film. That collection is currently listed as being out of print. The film is currently available at http://www.grapevinevideo.com/.
Posted by Azrael Bigler at 11:05 PM

Labels: 3 and a half stars, Oscar Micheaux, reviews, Silent Films