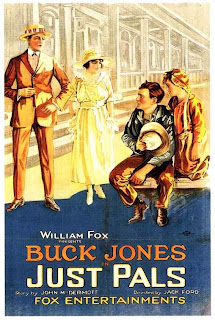 There’s a moment in Just Pals when I thought to myself, "Now I’ve heard everything." The cause of this inner remark was an exclamation that I had never read – let alone heard - before. About ten minutes into the film, a young hobo (the intertitle’s phrase, not mine) named William looks at a young woman named Mary and says, “She’s sure some nifty jane!” Having never heard this expression before, I felt immediately that I was witnessing a world that didn’t exist anymore. And in truth, I was.

Just Pals tells the story of a simple man named Bim (Buck Jones), who the film describes as the “idol of youth” and the “bane of elders.” The children in Norfolk admire his carefree lifestyle, for he doesn’t work and seems to have no aspirations; the town’s adults resent him for the very same reasons. As the film begins, Bim awakens in his bed of straw and upon sitting up sees two men pitching hay onto a truck. Seeing them, he becomes physically exhausted again and hollers to them that they are making him tired; he subsequently goes back to sleep. However, a film protagonist cannot simply be about sleeping and scrounging for food; he must have something that breaks him out of his mundane routine. For Bim, that inspiration is Mary Bruce (played by Helen Ferguson), a devoted and caring school teacher, who Bim looks at from afar with admiration. If only he had something to offer her, and if only she weren’t dating such a financially irresponsible man as Harvey Cahill, a cashier at an Express company, a man who we just know will cause problems for Mary down the road.

Into this triangle steps William, a down-on his-luck boy who gets around by sneaking onto trains. On a train destined to Norfolk, William is discovered and chased by a conductor. Eventually the conductor drops the boy into a ditch, an act that horrifies Mary and enrages Bim, a principled man despite his apparent lack of ambition. After coming to his defense – albeit without the intended result – Bim and William become good friends, sleeping the day away, looking for food, and passing the time as if they hadn’t a care in the world. Not unexpectedly. William’s arrival changes Bim’s priorities and causes him to reflect upon his own place in the world. He determines that things will be different for William. William will get an education and take regular baths. As for him, Bim determines to get a job, but to do so he needs a uniform, which he doesn’t have. Not to worry, though. William has a solution.

Just Pals is not a complicated movie, but it is one that avoids clichés. One expects Bim to be revealed as an undiscovered hero and to engage in heroic acts when called upon to do so. However, other elements of the story – William’s answer to Bim’s lack of a uniform, Mary’s act of desperation, Harvey’s solution to his financial trouble, to name just a few plot points – are fresh and send the film in unexpected directions. Adding to this are extraordinary images of Norfolk’s landscape and sunsets that create a sense of awe even though they were filmed in black and white. However, that should be expected, as the director of the film was a young Jack Ford – better known today as John Ford. (on DVD)