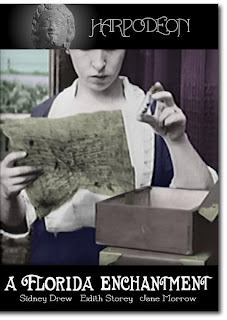 Eighty-six years before Martin Lawrence dressed up as Big Momma and sixty-nine years before Barbra Streisand donned men’s clothing for Yentl, there was Edith Storey in Sidney Drew’s 1914 film A Florida Enchantment. However, unlike those later films, in which characters pretended to be members of the opposite sex for somewhat understandable reasons, Edith Storey’s character Lillian Travers actually becomes a man. How she does this is something I would not have believed had ever appeared on celluloid had I not seen it for myself.

Lillian Traver is a northerner who goes to Florida to marry her fiancé, Dr. Fred Cassadene, a well-known doctor who is highly sought after – and not just for his medical expertise. A certain Stella Lovejoy keeps feigning illness in order to get the doctor to pay her a visit, leading to many misunderstandings. After Lillian arrives at her aunt’s house, she decides to surprise her fiancée; however, it is she who receives the shock. Her first sight of her fiancée is of him holding Mrs. Lovejoy’s arm in a manner that looks a bit too personal. Enraged and overcome with jealousy, Lillian confronts him while weeping uncontrollably. Dr. Cassadene’s pleas and explanations offer little consolation. Back at her aunt’s house, Lillian comes upon a box left by her late uncle, Mr. Oglethorpe. The letter inside promises help to women who are suffering. However, whatever it is that can aid distressed women remains a mystery, as her uncle placed it in a duplicate box and hid it for reasons that are never fully explained or ever make sense. Lillian’s curiosity is understandably piqued. Later, after a finding the second box and experiencing another bout of disappointment and jealousy, again brought on by a misunderstanding with her fiancé, Lillian turns her attention to the box for a second time, for in the box is a letter detailing an odd and intriguing encounter, but it is an encounter with a disconcerting discovery. As the letter inside explains, her uncle was once shipwrecked and rescued while in Africa. While there, he was told that the tribe that aided him was able to increase its ranks by capturing women and – I kid you not – turning them into men by feeding them a seed from a special tree. As a token of the apparently deep friendship between Lillian’s uncle and the village chief, Mr. Oglethorpe received four seeds from this special tree, which just happen to now be in the duplicate box. As can be expected, Lillian takes one of the pills, and - presto chango! – she’s a man.

What follows is – if you can believe it – even stranger. Lillian, now a man, becomes attracted to women and begins kissing them hello and goodbye, which it must be confessed, the young ladies don’t seem to mind very much. They smile excitedly and allow Lillian to walk with them arm in arm. Her fiancé, on the other hand, becomes an object of revulsion to her. Both transformations cause the doctor great confusion, anguish, and hurt.

If this sounds peculiar, other elements are even more so. Lillian - or Lawrence as she later calls herself - decides to give her maid a pill, reasoning that she now needs a valet. As a man, the maid now pursues another maid, but she has a very different result than Lillian. Her advances are met with rejection, and her response to that rejection is often violent. The fact that the maid is an African-American played by a Caucasian actress in blackface will probably make contemporary audiences even more uneasy. There is also a moment when that character uses pillows to attack one of Mrs. Oglethorpe’s friends Major Horton. His response is to put on what appears to be Civil War gear and attempt to kill her after she is rendered unconscious. Stranger still is the fact that the scene seems to be being played for laughs. It’s hard to see these scenes having their desired effect nowadays.

What makes the movie something to see is Edith Storey’s performance. It is truly a thing of beauty. As a woman, Mrs. Storey plays Lillian with energy and joy, and her face lights up when Lillian feels loved. When she feels disrespected, her expressions turn to looks of anguish, making her decision to take the pill understandable, as her love has indeed become the cause of her suffering. Ms. Storey’s performance as a man is a work of art. Gone are the emotional expressions that she exhibited earlier in the film, replaced by the confident swagger of a man who knows what he wants and feels it is in his abilities to pursue it. As a man, Lillian is cunning and determined; at the same time though her facial expressions reveal a character who has lost a bit of the decency she showed earlier in the film. This is particularly true of her relationship with and treatment of her former fiancé. On the other hand, her reaction when Betty, the object of her affection, is going to sleep next to her shows the character’s innocence and inexperience. Mrs. Storey uses a combination of excitement and discomfort to express Lillian’s gambit of emotions. It is exactly the kind of reaction that a young boy beginning to discover attraction shows.

In fact, the film demonstrates a degree of acceptance of lesbian tendencies. It is telling though that that acceptance does not extend to homosexual tendencies. Male characters whose actions are perceived as expressions of those tendencies are in immediate mortal danger. At no point is Lillian in a similar position. A Florida Enchantment is an interesting, sometimes silly, and somewhat flawed film that unfortunately has an uneven final act and an unnecessary subplot involving an assault. Still, it does contain a great lead performance, and the relationship between Lillian and her maid is worthy of note, even if it is problematic at moments. In addition, it is a film that I doubt viewers will ever forget, even if they don’t completely know what to make of it. (on DVD as part of Image-Entertainment’s 3-disc set Origins of Film)