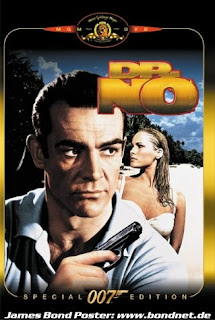 Watching Dr. No now is like stepping into a time machine and entering a world of cold war paranoia and thoughts of unrealistic world domination. The schemes to achieve that end are so convoluted as to have to be explained to the audience, not once but twice. It is a world of intrigue that towards its conclusion turns into an early predecessor of Star Trek technology, complete with electronic sliding doors, loud, oversized computers, and phone stations that resemble those from the 1940s. This is the environment in which audiences first saw James Bond operate, and if the twenty-two sequels that followed are any indication, audiences liked what they saw. A part of me wonders why.

Dr. No is a tale that perhaps best makes sense seen through the perspective of those that first viewed it. The film came out in 1962. The Cold War was well underway, the Cuban Missile Crisis was brewing, and China had already become a Communist country, adding to the long-held fear that Communist countries were seeking to spread their influence globally. Perhaps this created an environment in which an audience could accept a plan to throw guided rockets off balance with a radio beam as well as a group called SPECTRE (Special Executive for Counterintelligence, Terrorism, Revenge, Extortion) intent on ruling the world. However, present-day audiences are used to seeing these themes used as comic fodder in such films as Austin Powers: International Man of Mystery and The Naked Gun.

In Dr. No, James Bond is sent to Jamaica to investigate the murders of Agent Strangways and his secretary. Once in Jamaica, he sets out to solve the mystery, and he doesn’t necessarily have a hard time at it. Clues seem to be easy to stumble upon, and all of them lead him in the right direction. In fact, I can’t recall him ever having to question a witness or suspect twice. Soon, he has put all the pieces together and is heading to Crab Key, an island that is occupied by the mysterious Dr. No, a Chinese-German scientist bent on revenge and world dominance who just so happens to resemble Khan from the Star Trek series. Along the way, he is aided by a local agent named Quarrel, a CIA agent, and the beautiful Honey Ryder, who just happens to sneak onto Crab Key to find sea shells at the same time as Bond arrives to stop Dr. No.

Several moments in Dr. No elicited the kind of chuckles that using come while watching a ludicrous B-science fiction movie. For instance, in one scene, Dr. No talks to one of his agents from afar using some sort of speaker system. I suppose it’s meant to give the doctor an aura of mystery and danger, but to me, it just served to prevent the audience from knowing what he looked like. Later, after Bond, Quarrel, and Honey have successfully evaded capture, Bond and Honey wash themselves off in the water. Even though they are still in extreme danger, Honey can’t resist telling James how good he smells. Finally, to protect Dr. No’s lair, his troops drive around in tanks that can spit fire and which are painted to look like dragons. The designs though more closely resemble the patterns one would find on vehicles at a monster truck exhibition.

And yet it is hard to dislike Dr. No. After all, it is not meant to be Citizen Kane. Throughout all of its – for lack of a better word – silliness, there is the strong, stoic, and charismatic performance of Sean Connery. He injects James Bond with a sense of confidence, perhaps even overconfidence, which enables the viewer to know that no matter how much peril Bond appears to be in, he will somehow maneuver his way out of it, if not through his superior intellect then with his sheer physical strength. We also marvel at his way with women. In Dr. No, he beds not just one but three women, one of which is a spy bent on arranging his assassination. The life of James Bond is therefore every young man’s fantasy, one filled with adventure, heroism, patriotism, and trysts. Dr. No never stood a chance. (on DVD)