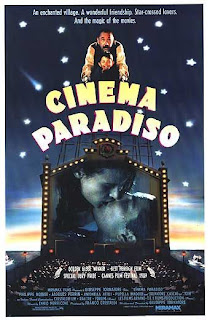 Giuseppe Tornatore's Cinema Paradiso is a movie about a man named Salvatore Di Vito (a name perhaps intentionally similar to Vittorio Di Sica’s), who is watching a movie in his head. The movie stars Salvatore himself and Alfredo, a man whom Salvatore learns at the beginning of the film has recently died. Guest starring in this movie are other people from his life, for example, his mother, a war widow who struggled to make ends meet, his sister whom he barely knows, and Elena, who may have been the great love of his life, but who – like many heroines in films – fate had other plans for.

The film is set in Giancaldo, Italy, a small town in which the townspeople’s favorite pastime is catching a film at the only theatre in town. The film is set during a time when films rarely if ever had second runs, before television took some of the power out of the movie-going experience, before home video made sure that future generations could see classic films any time they had the urge to. Because of this, movies are an event. Witness how excited the audience gets when the lights go out. They cheer excitedly when they see the preview for Stagecoach, as if they had been waiting for this movie for years. They tear up during La Terre Trema, they howl at Chaplin trying to referee a boxing match, and as they exit the theatre, they talk about the film they have just seen, eager to share their opinions and to hear the opinions of others.

This fact does not escape the local church. In the beginning of the film, we see that films were censored by the Church, as if films have the power to corrupt or cause unhealthy curiosities in people. We see a priest previewing the latest film to make sure it is decent enough for the general public. The priest is spellbound by Verso La Vita. For example, his body sways to the emotion on the screen and his head moves from side to side. He even almost sheds a tear. He is clearly enjoying the film. Despite this fact, when two characters kiss, his enjoyment turns to outrage, and he rings a bell signaling to Alfredo that that part does not meet the standards of decency and should be edited out quickly. As years go by, though, the Church clearly loses its ability to decide what images are morally acceptable, and the audience is able to see for the first time actors kissing on screen. They are even able to see Bridget Bardot sunbathing nude in her back yard, a sight that causes more than one young boy to do something extremely inappropriate in a theatre. Different times, indeed.

Salvatore, or Toro as he is called throughout the film, catches the town’s appetite for cinema early in his life, and it fills him with an energy and a passion that is missing when he performs other tasks, such as being an altar boy. While performing that duty, he falls asleep. However, when there’s a new movie in town, his eyes light up, and he’ll do anything to see it. Because he is a frequent visitor to the theatre, he knows its projectionist, Alfredo. Salvatore tries to befriend Alfredo and learn to run a projector, but Alfredo resists, explaining that the job is a curse, not a blessing, for it robs him of time and fills his days with monotony. Later, Alfredo needs Salvatore’s assistance (I won’t spoil it by telling you why), and in order to get it, he must agree to teach the young boy how to be a projectionist. In the years that follow, the two of them form a friendship that is based on more than just on films and professions. Alfredo becomes Salvatore’s mentor and, in a way, his father, and he assists and advises him in matters related to love and life. It is a remarkable friendship.

While much of Cinema Paradiso concerns the friendship between Salvatore and Alfredo, the film is also about the people who put so much stock in the theatre. In the theatre, couples meet for the first time, lovers use the closeness of the theatre for secret rendezvous, prostitutes use the back room as a business location, and gangsters knock off victims. Yet for most people, the allure is the film itself, and in a way, Salvatore’s life begins to resemble a movie, for only in movies would a man sneak into a confession box just so he can pour his heart out to the one he loves. Where else but in movies would a man stand outside a woman’s house day after day just to prove how devoted he is to her? It should also be said that the theatre has a negative effect on Salvatore, for Salvatore speaks of not being able to attend school because of his job, a fact that concerns Alfredo immensely. He has been down that road before and wants more for Salvatore.

Cinema Paradiso is a nostalgic film about a time we have lost, and there is a sadness in that fact. With the passage of time, the immediacy that accompanied a new film has been lost, giving way to TV movies-of-the-week, home video, and big budget blockbusters that are shown seven times a week on premium movie channels. Yet one look at the faces of those in attendance at both Alfredo’s funeral and the demolition of the theatre he and Salvatore worked so tirelessly for is ample proof that for previous generations, movies, as well as those who associated with them, were something else, something extremely vital, something that cannot be replaced. (on DVD)

*Cinema Paradiso is in Italian with English subtitles.
Posted by Azrael Bigler at 2:45 AM

Labels: 3 and a half stars, Giuseppe Tornatore, Italian Cinema, reviews

I’d like to comment on your review because, while I like what you said about this movie, I also consider Cinema Paradiso to be the ultimate movie about movies and fully deserving of a whole 5 star accolade.

The movie is similar to 8 ½--the ultimate movie about moviemaking—in that we first meet Salvatore when he is an accomplished filmmaker at the crossroads of his career and follow him as he mines his past which will eventually free him so he can move forward with his cinematic art. Salvatore’s youth takes place at two phases, at the parish movie theater where “paradise” is found in his early years in the townspeople and the movies they experience together, and, later in his young life, at the Nuovo Cinema Paradiso, now run by the local mafia bigwig (the town is in Sicily).

This movie works so well on so many levels. Take, for example, the grand figure of Alfredo. His misdeed dramatically alters Salvatore’s life only to be redeemed with the astonishing posthumous gift he leaves behind for Salvatore; for another, there is the worldwide culture of movies so wonderfully shown especially when Alfredo literally turns his projector on the town square to transform the whole town into a Cinema Paradiso. I could go on and on. This is one of the great movies to come out of Italy.