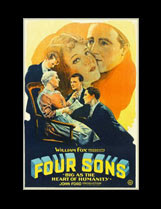 John Ford’s Four Sons is an all-American film set in a land far from North America. Beginning just prior to the outbreak of World War I, it is set in a small town full of life and civility. Here, it seems every man doffs his cap, and every child is free and safe to run around in perfect happiness. It is a place without strangers. In this town live Mother Bernle (Margaret Mann) and her four sons, Joseph, Johann, Franz, and Andreas. At the dinner table ever night, they express their thanks for what they have been given. This practice continues even after disaster befalls them, even after death and hunger visit them.

The film’s villains comes from outside the city in the form of cruel, petty military leaders who sip champagne and toast their good luck at being able to lead young men to die in a war in which they themselves will not be at risk. The top leader is Major von Stromm (Earle Fox), a man whose belligerence is made crystal-clear. This is a man who has no qualms belittling his own troops and slaying a stray cat that tries to cross his path. In the Bernle family, it is Joseph (James Hall) who is unfortunate enough to encounter von Stromm. The meeting leaves Joseph ridiculed, slapped, and longing for the golden shores of the United States. His mother makes this desire a reality. As the war begins, Johann and Franz proudly don their country’s uniform and march off to fight for their country. While other townspeople cheer and wave to the departing troops enthusiastically, Mother Bernle sits on her porch, filled with a sense of despair and fear. These feelings prove to be justified, as war takes a toll on the Bernle family and eventually pits brother against brother on the battlefield.

Four Sons contains some fascinating and powerful contrasts. Compare the beginning of the movie - the town’s postman (Albert Gran) joyfully walking around the town, villagers smiling, children laughing, the village bright and affluent – to the same day years later – disheveled, barely recognizable people standing in food lines, homes empty of the basic necessities. Compare the postman before the war - jovially performing his job and being greeted with smiles, laughter, and excitement to the broken, bent, slow-moving figure that fills the townspeople with dread as he delivers letters filled with the terrible news that loved ones will not be coming home. Compare the energy and life that surrounds the Bernle family’s dinner table at the beginning of the film to the empty, dark atmosphere that occupies the house at the end of the war. This is a town that will never be the same.

Four Sons does an excellent job of showing war’s effects on individuals through its focus on the Bernle family. However, it does present a somewhat peculiar view of early 20th century Germany. The villagers are presented are completely innocent and therefore can be forgiven for their naïve excited support of World War I. Their later revolt is presented as justified, not as an act of treason. At one point, von Stromm questions Mother Bernle’s patriotism due to Joseph’s enlistment in the American army. However, none of her neighbors do so. Rather, they later enthusiastically support her decision to relocate to the United States. I wonder whether people would really be so happy that one of the own was leaving to live in a country that was part of the force that defeated them and enacted the Treaty of Versailles, which held Germany personally responsible for both the war and reimbursing those nations that fought against them. But perhaps there’s a better, more pertinent question: How exactly does a middle-aged woman who speaks absolutely no English sneak off Ellis Island and find her way to New York? (on DVD)