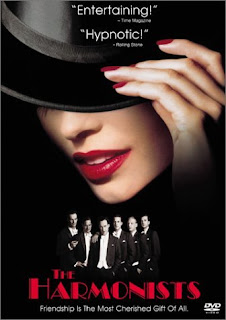 In Germany in 1927, at a time when three million people were unemployed due to the Depression, six extraordinary singers – Harry Frommermann, Robert Biberti, Enrich Collins, Ari Leschnikoff, Roman Cycowski, and Erwin Bootz – came together to form a group that was later called the Comedian Harmonists. The group, much like the Revellers, would function as a unit. No individual would stand out, not even the piano player. The group is now considered one of the most important groups in the history of Germany. Their story, told in the movie The Harmonists, is one of hope, triumph, and bitter disappointment.

The film’s central character is Harry Frommermann (well-played by Ulrich Noethen), a struggling actor who is told he has the unfortunate tendency of turning drama into comedy. He argues that he is not an actor but a musician, a remark that does nothing to inspire confidence in his agent. Harry comes up with the idea of bringing together five individuals to sing five-part harmonies, a complex undertaking that the singers would have to make appear relatively simple. To make his dream a reality, Harry places an ad in a newspaper. Through the ad, he meets Robert Biberti (Ben Becker), a man who sees the potential in Harry’s idea but thinks it needs a better selection process than random casting calls. Soon they have assembled their group, six men chosen for their talent and voices, three of whom just happen to be Jewish. Three years later, they are the talk of Germany, complete with fans and sell-out concerts; later, they will even be invited to perform in the United States.

The Harmonists unfolds in three acts. In the first, we learn how the group formed and how they got their first gig. It is undoubtedly the most conventional of the three acts. The group struggles, argues, and eventually talks of breaking up. This act even includes the obligatory scene in which, after having failed an audition and decided to quit, they sing a remarkable extemporaneous number in a bar and decide that they will give it one more shot. In typical fashion, of course, they take full advantage of this last chance and rewards follow. The second act shows us their early years of fame, years when it seems as if success, love and happiness are theirs for the taking. By this time, three of them have settled into relationships, a few of which interfaith relationships. However, it is during this time of jubilation and prosperity that Hitler and the Nazi Party begin to rise in popularity, a phenomenon that is greeted by dismissals and light-hearted jokes despite the danger that it will present if it turns out not to be a passing fad. The third act takes place in 1933, a time when Nazi emblems are everywhere and the threat posed to German Jews is clear to those people whose eyes are open. It is a time that will test not only the Comedian Harmonists but also their fans, people whose love of music transcends the climate of intolerance that is beginning to sweep Germany.

Many parts of The Harmonist are noteworthy, in particular Harry’s visits to his parents’ grave. There, he tells them about his daily life, as well as his hopes and fears. Also interesting is the relationship between Harry and Robert, who just happen to love the same woman, Erna Eggstein, a young student who clearly loves the innocent and wide-eyed Harry but finds herself drawn to the rugged and direct Robert. The former puts her at odds with the views of her peers who openly question her association with a Jew. This act, coupled with the fact that she is employed by a Jewish family, places her at risk when patriotic, Aryan fervor begins to engulf Germany. In addition, the scenes in which the group must confront the fact that politics and discriminatory laws are endangering their continued collaboration are powerful, for as some have a sense of what is coming, others exhibit a degree of denial, shrugging current sentiments off as temporary and dismissing worries of persecution as simply baseless conspiracies. In one scene, a German official informs Harry and Robert that due to the make-up of the group, they can’t perform anymore. In telling them this, he is curt and emotionless. A moment later, however, the official, now a little lighter and more affable, asked them to autograph one of their records for his nephew. It is a scene that perfectly captures the divided feelings of the group’s fans.

While the film is consistently interesting, several of the characters remain woefully undeveloped. With the exception of Ari, who is presented simply as a naïve, good-natured lover of women, the other members of the group remain enigmas. However, this is a minor quibble in a movie that is both moving and tragic. That politics could break up such a talented and loved group is a shock, and the group’s demise is heartbreaking. It’s interesting to note that it is a heartbreak felt by all ages, from the elderly women in the audience, their faces beaming with joy at hearing such beautiful songs, to the children, laughing at Harry’s humorous mannerisms, to the men and women smiling, singing alone, and then exploding into rapturous applause. This truly was a group adored by all. (on DVD)

*The Harmonists is in German with English subtitles.
Posted by Azrael Bigler at 5:08 PM

Labels: 3 and a half stars, Germany, Joseph Vilsmaier, reviews