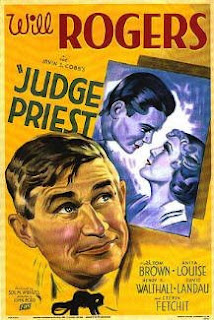 John Ford’s Judge Priest takes place in 1890 Kentucky, a place of perpetual nostalgia for a magical land lost to time and war, if in fact it ever existed at all. Older veterans swap stories of the war and their moments of glory; a more paranoid one polishes his gun, explaining that he is preparing just in case the North decides to invade once again. It is a land of flourishing green trees, beautiful moonlit nights, town parties, and harmony that is both refreshing and inspiring. In this small town lives Judge William Priest (the great Will Rogers), a gentle man with a big heart and a strong sense of justice and fairness. According to the scroll following the opening credits, he is an example of “the tolerance and wisdom of a vanished generation.” For twenty-five years, he has administered justice, and now in his later years, he finds his ideals, as well as his judicial seat, challenged by classism and disrespect.

As the film opens, Judge Priest is hearing the case of a man accused of stealing a chicken. I use the world hearing loosely, as he is also reading a newspaper. The defendant is an African-American man named John Poindexter (played by Stepin Fetchit), who swears he was fishing at the time of the crime. This alibi interests the judge immensely, as he himself is an avid fisherman. When he hears that Poindexter has caught rather large catfish using beef liver, he can’t resist going fishing with him himself. I guess that means he was found not guilty.

Much of the conflict in Judge Priest – and to be honest there’s just as much humor in it as there is conflict – surrounds one character, Ellie May Gillespie, a teacher who is also the object of affection of the judge’s nephew, Jerome Priest. After returning with a degree in law, a degree for which he looks a bit too young to have been able to have earned, the young man is hopeful of not only becoming a legal success but also continuing his relationship with Ellie May, an endeavor that his uncle supports whole- heartedly. In fact, love would be in full bloom if only Jerome’s mother Carolyn could get over her belief that Ellie May, her father a mystery, her mother deceased, is not worthy of their honorable family name. However, we’re soon introduced to Bob Gillis, a laconic loner, who may be the answer to Ellie May’s prayers.

Judge Priest is remarkable for the character of William Priest. Priest, while relaxed and deliberate in movement and delivery, is quick with ideas. He is instrumental is rekindling Jerome and Ellie May’s relationship, and when Jerome’s mother attempts to fix him up with a woman she views as more deserving of her son, the judge makes it so he is stuck with her instead of Jerome. The judge also manipulates his rival, Senator Horace Maydew, into reopening a criminal case, a decision that proves pivotal to the entire town. Judge Priest is also a man of music, and some of the film’s best moments showcase him and Hattie McDaniel singing songs of faith together. They prove to be an impressive duo.

And yet that brings up the most troublesome aspect of the film, its treatment of and indifference to race. The Kentucky of 1890 is presented as one of almost idyllic happiness, as a land where African-Americans, possibly even former slaves, all love their place in society and the state they live in, this despite the fact that they all appear to be either maids, nannies, or chauffeurs, all professions related to domestic help. McDaniel’s Auntie Dilsey is forever smiling and finding a reason to sing, even if the only subject she can think of is the judge’s clothing. John Poindexter is presented as lazy, slow-witted, and willing to do anything for a valuable piece of clothing. This is hard to watch even if the role is played by Stepin Fetchit, an actor who made a career out of playing the laziest man alive. And while it could be suggested that Poindexter and the judge are friends, it would hard to find tangible proof of that, as Poindexter is the judge’s employee, never his confidant.

Judge Priest must be watched bearing in mind the sentiments of proud Southerners who felt a deep loss after the conclusion of the Civil War. To them, as well as many people today, the South that existed prior to 1861 was a land of nobility and tradition, and its heroes, deceased and living, were to be celebrated, even though they were on what history has deemed the wrong side of a war. Towards the end of the film, there is a parade to honor the veterans of the Confederate Army. All along the parade route are cheering citizens, young and old. Draped on the building around them are large confederate flags, symbols to many Southerners of their ancestors, but reminders to many others of the days of slavery. This fact, added to the fact that the film occurs just fifteen years after the unjustified and tragic abandonment of Reconstruction and after the formation of the KKK, would seem to me to create an atmosphere of nervousness and fear for African-Americans. However, the movie depicts them as being overjoyed at the sight of these veterans, as if they somehow agree with the cause they fought for. It reminded me of the scene in Gone with the Wind in which a regiment of African-Americans march with shovels in their hands to dig trenches for the Confederate Army, proud that they are doing their part for the South, an area where many of their brethren, and possibly themselves, were still enslaved.

Judge Priest carries the baggage of having been made during a time when sensitivities were not what they are today. One need only contrast Stepin Fetchit’s character John Poindexter with Daniel Holt, Jeffrey Wright’s role in Ang Lee’s underrated Ride with the Devil, to see the difference in the complexity of African-American characters in Civil War dramas today. In addition, the climax of Judge Priest presents an odd picture. A man appears to go free not because his innocence is proven in court but because he served as a Confederate soldier, an act that by itself seems to prove his character to the jury deciding his fate. While it may be patriotic to their former cause and reveal to them a kindred spirit, it is an odd way for a justice system to work. Add to it the fact that Stepin Fetchit and several other African-American musicians are playing “Dixie” outside that courtroom while children dance around them and you’ve got a scene that could only exist in the Hollywood of old.

However, despite my misgivings about certain elements of the film, Judge Priest has a certain charm to it. Its central story is an interesting one, and its characters are involving. Its representation of African-Americans is an unfortunate element, but like other films, it is a product of it time, and all in all, it’s not a bad one at that. (on DVD)