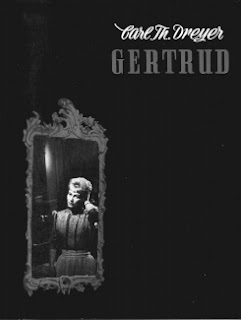 Perhaps nothing has as much destructive power as a relationship gone sour or as love denied. For evidence of this, witness Gertrud Kanning (Nina Pens Rede) sitting on a piano bench next to her husband Gustav, her head slightly raised, her eyes looking off in the distance at nothing in particular, her mouth devoid of anything resembling emotion. Gustav, for his part, only occasionally looks at her, matching her distant stare, as if they were in a contest to see who can go the longest with looking at the other. It is Gustav who is the first to show a hint of life. It seems, he explains, that he is to be asked to be a cabinet minister, a position that if attained would be the culmination of years of long nights and extreme diligence. If this news pleases Gertrud, she does not show her joy. Instead she answers him with such passivity that you may think her indifferent to the news. You would actually be correct. Theirs is indeed a marriage beyond repair, yet only one of them seems to know just how broken it is – and perhaps how much it always has been.

Gustav continues to relate the events of his day, events that include running into his wife’s former flame, Gabriel Lidman, now a rich and famous poet. Her husband’s mentioning of Gabriel’s name brings up a flood of memories, yet the memories his name elicits are not pleasant. They are the memories of break-ups, hurt feelings, and gifts that have lost their significance. The reminiscing having reached its merciful end, Gertrud turns to leave, but she is stopped by her husband’s seemingly simple request for a kiss. It is a request that she denies. Later that evening, Gabriel again is seen gazing off into the distance, his face registering only a glimpse of surprise when he hears his wife’s request for a divorce.

Carl Theodor Dreyer’s Gertrud is about the official end of a marriage. I say “official” because it is clear that whatever feelings and attraction had first brought Gertrud and Gustav together ended long ago, even if Gustav had not completely realized it. Gustav, like many other men before him, made the mistake of believing that working hard in his career was the same as working hard in his marriage. Hearing his wife say that putting a job first is worse than indifference most likely comes as quite a shock to him. However, also just as many others have, he suspects there must be another explanation for his wife’s discontent, another man perhaps, as if that would somehow exonerate him of any culpability for his failed marriage. In fact, Gustav is correct in this also, yet that fact blinds him to the real causes of the couple’s misery, melancholy to which he contributed but did not initiate. No, Gertrud’s gloom dates back to a time before their marriage, to the time of Gertrud and Gabriel.

Gertrud unfolds slowly. Gertrud at first appears cold and removed for no apparent reason. As the film progresses, we see traces of happiness in her, such as when she interacts with Erland, but even in these moments, we sense that her happiness may be superficial, that she may be trying too hard to attain something she lost long ago. It is only later that we see the origin of the drama and the parallels between the past and the present. “Have the courage to think good thoughts,” Gabriel tells an audience honoring him. His later conversations with Gertrud reveal just how hard this is even for a successful man like him. Imagine how hard it must be for a woman like Gertrud.

And yet it should be said that Gertrud is not completely without blame, for she has left her husband in the dark for quite a while as to the extent of her feelings. To him, Gertrud’s feelings are new and therefore not yet permanent. To him, the marriage can be saved. Perhaps if he just alters his schedule, tells her he loves her more frequently, picks her up from the opera… But just how do you please someone who says that the man she’s with must be hers completely and equates her marriage, not with love, but with the pleasures of the flesh?

Like many of Dreyer’s films, Gertrud is not easy to watch. In some respects, it may be harder to watch, as it contains some truths that can be painful to acknowledge. Sometimes pursuits of careers ruin loving relationships, and sometimes people choose careers over loved ones, even if it condemns them to a life of isolation and loneliness. Hearing Gertrud tell Gabriel, “You’ve become a great man, and now everything is nothing” caused me to reflect upon the decisions I have made in pursuit of a career in teaching, as well as the amount of personal time I have lost in this pursuit, time that could have been spent building bonds instead of weakening them. In a time when it is reported that half of all marriages in the United States end in divorce and divorce rates in places like Taiwan continue to increase steadily, I wonder how much of the reason for this stems from issues like those that Gertrud gives voice to. (on DVD from Criterion Collection)

*Gertrud is in Danish with English subtitles.
Posted by Azrael Bigler at 5:06 PM

Labels: 4 and a half stars, Carl Th. Dreyer, Netherlands, reviews