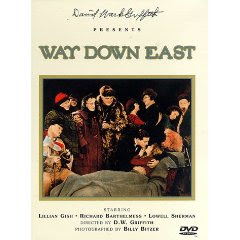 D.W. Griffith’s Way Down East is about a woman in peril. The scroll that follows the opening credits makes that clear, explaining that women suffer “because men have not yet reached a high moral standard.” The implication of such words is that woman must be on the lookout for men whose interests may not necessarily be a woman’s mind, no matter how much he insists that it is. And this is indeed one of the dangers that awaits young Anna Moore as she leaves the comfortable, familiar setting of the countryside to seek financial assistance from her wealthy relatives, a journey that sees her enter what is for her a new world. However, as vulnerable as she is to the sweet, romantic advances of male strangers who are instantly attracted to her, she is also mistreated by women who despise her, some for her homemade clothes and low economic status and others because they perceive her as being morally inferior to themselves. Here’s just a sample of how Anna is treated by those who should be more supportive - her aunt recoils when Anna goes to hug her, her rich, pampered cousins want Anna to sent home immediately, and later, Anna’s aunt sends her to bed because she is taking attention away from her daughters.

Anna (the exceptional Lillian Gish) becomes the object of desire of one Lennox Sanderson (well-played by Lowell Sherman), the privileged son of wealthy parents, a man who has but one interest, women. Anna, unaccustomed to receiving attention from such a wealthy and supposedly noble man, is instantly flattered by his romantic words. Upon hearing her eyes compared to those of a lily maid, Anna hides her face, giggles, and says, “Tell me more.” Later, Lennox kisses her hand, and after Anna retires to her bedroom, she rubs the hand he kissed against her check, as if reliving that most memorable moment. Lennox’s plan works to perfect. He is so convincing that he is able to get Anna to go to his home alone under the pretense of meeting his non-existent aunt. Once there, she will get the surprise of her life, a wedding proposal. Her reaction is one of a woman who just received her lifelong dream. Tears build up in her eyes, as emotions flow within her. She is flattered and overjoyed. Falling into his arms, she accepts his proposal. It would all be so romantic except for the fact that we know it’s a sham.

Way Down East follows Anna’s journey from young, naïve woman to abandoned, disapproved of single mother. It is quite an emotional journey for the viewer, for it takes place at a time when a woman could and often times would be blamed for whatever misfortune befell her. Added to this is the emphasis that the times placed on religion and a woman’s virginity. From Anna’s landlady, Maria Poole, grilling her over the whereabouts of her husband to David Barlett, who falls for Anna in part because of his belief that she is still a virgin, the movie makes it clear that for many of the character’s there are only two types of women, the innocent and the loose, the kind one marries and the kind one keeps a male relative away from. Anna is at constant risk of being deemed the latter, a judgment that if rendered would have disastrous consequences.

Not every part of Way Down East works. Perhaps it was felt that the film was too heavy and depressing. Such thoughts may explain the appearance of lighter, less conventional characters toward the end of the first half of the movie. These characters include a quirky professor who likes catching butterflies, an odd older woman who is prone to comic violence, the man who has apparently stalked her for twenty years, and a dim-witted relative who laughs at everything. Their scenes are intended to provide comic relief, but I found myself grimacing more than laughing. It reminded me of the way I felt watching John Ford’s Tobacco Road. As it was when I watched that film, it was hard for me not to feel that Way Down East was mocking some of its working class characters intentionally. On the other end of the spectrum are Squire Barlett and Mother Barlett, who both treat Anna respectfully, but face a conflict when they learn Anna’s tragic story. In particular, Squire Barlett’s upbringing simply doesn’t allow him to see Anna as anything but a woman to be shunned and cast out.

In the end though, Way Down East is not about these supporting characters. It is about Anna, and as Anna, Lillian Gish is truly astonishing. For an example of her incredible range and talent, one need only look at the scene in which Anna is in a hotel room with Lennox after her “wedding.” In that scene, Anna sits with Lennox after having been showered with gifts. Although now married, she still feels embarrassed around him. She hangs her head slightly and covers her face, as if she is unsure of what to do now. Then she speaks the words that fill her with joy. “My…my husband,” she says. In an instant, her inhibitions fade, her face rises, and her hands lower, revealing one of the most honest smiles ever captured on film. At that moment, Anna becomes an adult in front of our eyes. There are many other moments in this film that will make you marvel at Mrs. Gish’s talent. Any discussion of the greatest actresses of all time must begin with her. (on DVD from Image-Entertainment)