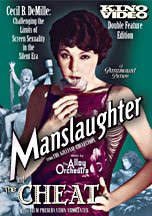 Cecil B. De Mille's Manslaughter is ultimately a film about the redemption of three characters during a decade in which a certain form of decadence has taken hold of many of the young. Coming of age in the aftermath of the First World War, a conflict that left many of them orphans, many young adults had suddenly found themselves affluent not due to their own diligence but because of the death of one or both of their parents. One of the effects of this I’m told was that a generation grew up not understanding the transitory nature of wealth or the value of hard work, and thus in the decade that is sometimes called the Rolling 20s, fortunes were needlessly squandered. In fact, many of the youth we see in Manslaughter are more interested in the sound of the trumpet and the jitterbug than in putting in a hard day's work and saving for the future. It is in this time of waste youth and squandered incomes that De Mille's film takes place, and its chief example of someone caught up in the glamour and the excess of the times is Lydia Thorne (Leatrice Joy), a woman overjoyed at the sight of a pogo stick, flattered by male attention, and possessing a carefree attitude regarding alcohol and men. She is a woman who thinks nothing about trying to outrun a train or bribing a police officer with jewelry. And yet by some people's standards, she is an incredibly fortunate woman. After all, it is not every woman that is pursued simultaneously by three men with enormous earnings potential.

Of the three men competing for her affection, two are worth mentioning, for each of them loves Lydia for very different reasons. First, there's the former governor Stephan Albee (John Miltern), a man who loves the freewheeling, wild side of Lydia, the side that alcohol, music with a frantic beat, and a lively party bring out. Morally bankrupt, he thinks nothing about trying to deceive a drunken unreserved woman into marrying him. Then there's the Distict Attorney Daniel O'Bannon (Thomas Meighan), the film's hero. We know that because he loves Lydia not for who she is but for who she can be. Yes, he sees the woman behind the outlandish, juvenile behavior, a woman with the potential to be so much more than she is when in the company of Governor Albee and his wild crowd. Getting to that woman could prove tough, though, for it is Lydia's belief that there's nothing wrong with a woman not restraining herself to the roles prescribed to the more traditional women of the times. As she explains it, “Modern girls don't sit around and knit.” And so off she goes to partake in the excesses of the moment, while Dan is left to curse the falsity and immorality of the times, times that cause him to reminisce on ancient Rome and the lustful orgies and sinful behavior of its time.

The film then introduces Evans (Lois Wilson), Lydia's faithful but increasingly desperate maid. Evans, it turns out, has a sick son, and unless she finds a way to send him to a place with a warmer climate, their doctor warns, he could die. Having only $20 to her name, Evans is forced to make a terrible decision. Later, when she is questioned about the theft of one of Lydia’s many pieces of jewelry, it is her body language that gives her away. Discovered, she becomes physically weak and collapses into Dan's arms. This is unfortunately witnessed by Lydia, and her heart is hardened to Evans' family emergency. Evans will have to come before judge and jury in spite of Dan's initial pleas for mercy and compassion.

I expected Manslaughter to turn against Lydia and for Dan and Evans to find each other in the end. However, I was mistaken. Instead, we are taken back to the story of the police officer who Lydia paid off with a bracelet earlier in the film. Seeing how tarnished he is by the incident, how he loses stature in his own home and is told he is no longer worthy of Chevrons bestowed upon him for bravery made me realize the destructive effect - albeit somewhat unintended - that Lydia can have on others. However, Officer Drummond's domestic fall from grace is nothing compared to the damage that Lydia’s inflicts - again not completely intended - upon him later when he attempts to put matters right. Her actions then, as well as her subsequent behavior during her eventual trial, cause her to be seen in an entirely different light.

As I said in the beginning, Manslaughter is ultimately a story of redemption. As one character falls from grace, another rises to prominence. As one becomes vengeful, another embraces peace. For some, it takes mental strength to recover; for others, it requires a bit of divine intervention. Perhaps in the hands of a lesser director, this may have seemed contrived. However, in De Mille's hands, it is moving and engaging. In Manslaughter, we witness a D.A. charging the woman he loves with manslaughter, a woman suddenly realizing the serious nature of her crime and trying the look remorseful, a widow clutching the torn, blood-stained uniform of her deceased husband and then verbally and physically assaulting the person she blames for his death, and a man losing faith in himself and his judgment simply because he followed the law to the best of his ability.

The performances in Manslaughter are all worthy of praise. Thomas Meighan, in particular, delivers a powerful performance. Equally up to the task are Leatrice Joy, Lois Wilson, and Julia Faye as Officer Drummond's wife. Mrs. Faye's performance during Lydia's trial was particularly moving, as she struggles to testify against a woman who doesn’t seem to comprehend the agony that her actions have caused her. It is a credit to the film that Lydia's redemption does not include being forgiven by Mrs. Drummond and that Lydia actions never completely stop harming those around her. After all, in an age of moral ambivalence, one person's redemption may be another person’s golden opportunity. (on DVD from Kino)