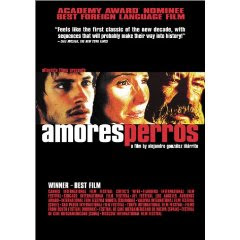 On one level, Alejandro Gonzalez Inarritu’s powerful film Amores Perros is simply the story of the people in and affected by a horrendous traffic accident. The accident involves two cars, one trying to escape from a handful of men with guns and the other faithfully following a traffic signal. On another level, Amores Perros is about a group of people desperately attempting to hold on to hope and love, completely oblivious to the contradictions in their own actions. It is a movie in which love for humans and animals are juxtaposed, and man’s best friend becomes both a symbol of people’s connection to the world around them and their ever increasing distance from the moral code that is supposed to bind society together.

Take these contradictions for example. One character, Octavio (Gael Garcia), loves his dog Cofi and defends if from people who would try to hurt it. Why then does he enter it in dogfights that are so violent that Cofi could easily be killed? Another character, a man named Daniel (Alvara Guerrero), is supposedly whole-heartedly committed to taking care of his girlfriend Valeria (Goya Toledo) after she suffers extensive injuries in the accident. Why then does someone keep calling and hanging up whenever Valeria answers the phone? And what do we make of Susana (Vanessa Bauche), the object of Octavio’s affection but also his brother’s wife? One minute she’s pleading for help, afraid of what her husband will do if she tells him she’s pregnant again. The next she’s giggling joyously and becoming extremely passionate after her husband gives her a Discman. Can her happiness be bought with so little? And then there’s Chivito (Emili Echevarrio), a man who has no problem carrying out assassinations but who will defend his dogs to the death. Are the lives of dogs and the acquisition of money more important to him than the lives of human beings?

Amores Perros is told in three parts. The first part focuses on Octavio, Susana, and Ramiro (Marco Perez), Octavio’s older brother. Ramiro and Susana are married and have a baby, but they are anything but content. We see Ramiro verbally berate Susana and later see evidence of minor physical abuse on her. To her rescue comes Octavio, whose solution is simple. They will run away together. The only obstacle to this plan is their lack of money, so Octavio begins entering Cofi in dogfights, completely ignoring Susana’s not so subtle hints that Octavio doesn’t completely comprehend the situation she is in. At the same time somewhere across town, a famous model named Valeria is sitting down to an interview on national television. In what must seem like quite a scoop for the network, Valeria admits to having found true love and even brings out the lucky man. If only her life were this simple. Her relationship, it turns out, is a ruse concocted to hide the fact that the man she is really in love with is married and has two children, a fact that the press would undoubtedly have a field day with. Valeria and David’s story is the second part of the film. The last part of the film involves Chivito, a man who wanted to be Che Guevara, but ended up being more like Leon in Luc Besson’s film The Professional, isolated and alone. His story is one of lost dreams, lost families, and ultimately redemption.

Amores Perros, like Inarritu’s films 21 Grams and Babel, is not told in chronological order. It begins with the car crash and then shows us what led up to it and what followed it. It is the perfect technique for a film like Amores Perros, for it allows us to view the earlier events not in suspense but in horror. We recognize the path Octavio is on and cringe as the moment of the accident approaches. Conversely, we see Valeria’s joy and watch with immense sadness as the moment it gets taken away from her draws nearer. As I was watching Amores Perros, I reflected upon the fact that often our actions are dependent upon the willingness of others to go along with them, even if they should not be. Octavio should be seeking a better life for himself with or without Susana, Valeria should not be settling for a man who is growing increasingly frustrated by her physical limitations, and Chivito should not be waiting for permission to make up for his past mistakes. Yet they are doing just these things. Perhaps they are all paralyzed. Perhaps all they feel they can do is simply hope that everything will somehow work out in their favor. However, the title of the film, Amores Perros, hints at a completely different conclusion. (on DVD)

*Amores Perros is in Spanish with English subtitles.
*Amores Perros contains graphic scenes of dogfights and their aftermath.
Posted by Azrael Bigler at 11:35 PM