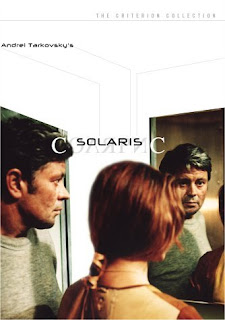 It begins with a simple set of good-byes. While there’s nothing out of the ordinary about that – after all, millions of good-byes are said every day – these seem different somehow. Characters appear to be fixated internally on squandered moments, times when words should have been said but weren’t. A character refers to this day as “the last day.” Tears are shed, papers accumulated and stored over the years are burned, and a father and son lament that it is only now that they are beginning to truly speak to each other. One man tells his friend not to worry, for he will take care of the funerals and burials of the other’s parents. Even long looks at nature hint at the finality of the moment. And yet no one is sick or even close to death. Rather, what is unfolding in front of us is simply an unfortunate part of a man’s chosen profession. That man, Kris Kelvin (Donatas Banionis), is a scientist, and his destination is much farther than the moon or Pluto.

Kris’s destination is Solaris, a planet referred to as a mountain of disoriented and disjointed contradictions. The planet appears to have no land masses at all; furthermore, it appears to be made up of swirling gaseous particles. The planet, which was once the object of excitement and speculation, is now a source of frustration as the Russian government questions whether to pull the plug on the space station that is currently orbiting the planet. Added to this is the confusing story of a pilot named Burton, who claims to have seen what appeared to be a giant, naked child during a reconnaissance flight, a child who bore an uncanny resemblance to the son of an astronaut who disappeared during the same flight. It is up to Kris Kelvin to somehow make sense of all of this.

But Solaris is not just an ordinary planet in the early stages of development, for it affects the crew in mysterious ways. Other than Kris, there are only supposed to be three other people on the space station, Dr. Snaut (Juri Jarvat), Dr. Sartorius (Anatoli Solonitsyn), and Dr. Gibarian (Sos Sargsyan). So who is the mysterious woman in the video with Dr. Gibarian? Who is the odd short man in Dr. Sartorius’ room or the beautiful woman in a short blue nightgown walking along the hallway? And how does Kris’s ex-wife Hari (Natalya Bondarchuk) suddenly appear on the space station when she committed suicide years earlier? The answer to these questions, as strange as it seems, is that these people are the materializations of the space travelers’ own conceptions. The planet has in effect recreated these people from the astronauts’ memories of them. Kris is told to consider himself lucky, for at least the person who appeared was someone he knew, a remark that reminds us that for every amazing, romantic dream we have there are an equal number of nightmares that cause us to wake us screaming. Just which one has Solaris recreated, and are they meant to please the crew or torment them?

Solaris poses some difficult questions. If the planet brings people back based on how someone remembers them or sees them in their dreams, what does it say that the Hari that returns is obsessive and emotionally unbalanced? Is this the way Kris remembers her? Is this really who she was, or is it that all Kris can remember of her is how she was in her final days, depressed, suicidal, and unhappy? Surely, that’s not who she was entirely. This begs the question: Do we ever really know someone?

While the questions the film raises are complex and interesting, the film’s pace may put off some viewers. This is not a film with intergalactic battles or planetary explosions. The conflict of the crew is internal. Should they go home, or hold on to the people whom the planet enables them to see and hold, people who are surely no longer living back on Earth? For Dr. Snaut and Dr. Satorius, the answer is easy and even logical. For Kris, it’s not so clear cut. Perhaps he sees in this Hari a second chance to save the woman who slipped away from him. He certainly acts as if he intends to protect her from the personal demons that inflicted his deceased wife. The problem is that this is not Hari, and it never will be. Watching Kris struggle to decide what to do is fascinating and thought-provoking, and yet the real victim in the film is Hari. While the others debate their futures, futures that they have a degree of control over, she is powerless to alter hers, a fact that seems to go unnoticed, even to the one who purports to love her. It all makes for an interesting and emotional ride, even if it takes a bit too long to get there. (on DVD from Criterion Collection)

*Solaris is in Russian with English subtitles.
Posted by Azrael Bigler at 11:32 PM