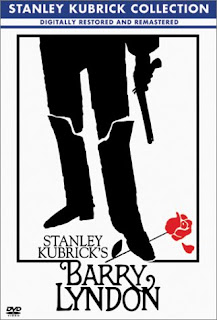 The world in which Barry Lyndon is a part of is one filled with civil cruelty. This may seem like a bit of an oxymoron, but consider these images – an army that lines up in a perfectly horizontal line and advances stoically towards oncoming enemy fire, soldiers who form a square around two new recruits and cheer them on as they engage in a rather one-sided fist fight, and one man nervously waiting for another man to shoot at him because the rules of the duel state that he must. Add to this the polite way that two bandits rob Barry at gunpoint – they even apologize for feeling it necessary to steal his horse – and you’re left with the sense that something in society has broken down, that what is supposed to hold people together – a sense of culture and decency toward one’s fellow man- has been replaced by a world in which civility is just a means to an end, and that end, it seems, is either military victory or the acquisition of wealth and women.

It is hard to know just when Barry Lyndon (Ryan O’Neal) officially accepts the notion that these are the goals he should try to obtain, for when we first see him, he is a young man full of romantic notions and youthful anxieties, sentiments that apparently his cousin does not share. Sexually aggressive and opportunistic, his cousin Nora (Gay Hamilton) has no qualms with seducing Barry with a variation of the game hide-and-seek. In Nora’s version, a necklace is hidden somewhere on Nora’s person. The object of the game is simple - seek the necklace, no matter where it lies. Sensing the implications of the game, especially considering the location of the necklace, Barry nervously declares his inability to find it, but his cousin does not let him off the hook so easily. Rather, she shows him exactly where it is, and even after Barry resists temptation for a second time, Nora will not be denied. Soon she and Barry are involved in an affair that will ultimately rattle and unnerve Barry to a dangerous extent. When Nora is pursued – rather willingly I might add – by a British captain named John Quin (Leonard Rossiter), Barry is determined to avenge his honor, but just who is he angry at? It seems to me his anger should be directed at Nora for leading him on and then casting him aside, yet Barry makes the object of his anger the captain who is simply trying to find himself a wife. It’s almost as if he is saying, “If I can’t have her, no one can.”

After a duel that forces him to go into hiding, Barry sets off for the exciting streets of Dublin. He never makes it. What follows is a set of what might be called misadventures. He is robbed, joins the British army, and eventually finds himself wandering the countryside as a deserter. If he was ever righteous before leaving on his journey – and I’m not sure there’s much evidence that he was – he is certainly not by the end of it. As time passes, Barry shrugs off all of his youthful notions of romantic love and accepts that the only path to happiness and security is through marriage. He sets his eyes on the Countess of Linden (Marisa Berenson), and the fact that she’s presently married makes no difference to him at all.

Stanley Kubrick’s Barry Lyndon is an intriguing movie but one that remains somewhat elusive. What exactly are we to make of Barry? Should we feel sorry for him? He is after all a man without a stable, noble father figure in his life, but there comes a time in everyone’s life when this kind of excuse no longer holds water. So should be root against him and hope for his rapid demise? Even this sentiment is difficult to completely commit to because for every moment in which he displays rude or vulgar behavior, such as when he blows smoke in his wife’s face after she politely asks him not to smoke around her, there’s an equally touching one, most often involving his relationship with his son Brian. To me, it is this issue that keeps Barry Lyndon from being the masterpiece it could be. In a way, Barry Lyndon is a film without a protagonist, and without one, I felt less invested in the film. I didn’t like Barry very much, but I also didn’t hate him. I sympathized with Lord Bulingdon, Barry’s stepson, but his final act is one that is hard to completely justify. I felt sympathy for Mrs. Lyndon but grew frustrated that she didn’t realize the powerful position she was in. Only Brian remains a completely innocent and likable character, but his character enters the film too late and his storyline is somewhat predictable.

However, there is much to recommend Barry Lyndon for. The film is well-directed, well-acted, and impressively shot. I particularly liked the intensity and pacing of the battles and the gun duels. Also interesting were the characters that Barry meets throughout the film, and I admired the way Kubrick was willing to leave the fate of some of the characters, in particular The Chevalier and Capt. Potzdorf, unknown to the audience. Towards the middle of the film, Barry receives a reward for saving Capt. Potzdorf. During a ceremony instead of being praised for his bravery, he is chastised for having fallen morally and told that he will come to no good. Barry tells his son a very different version of this day, one is which he is a leader and a model of bravery, the man who is solely responsible for an improbably military victory. Perhaps it is in this moment that we can most clearly see the reason for Barry’s failure. He wanted to be a hero, but he settled for being an opportunist and a liar. (on DVD)

Labels: 3 and a half stars, Kubrick, reviews