Review – Letter from an Unknown Woman 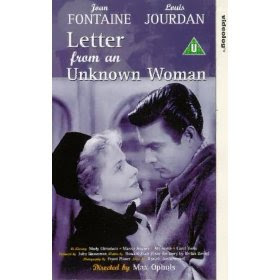 Max Ophuls’s Letter from an Unknown Woman may be the first movie to make me believe that teenage love can be both fully formed and eternal, a notion that I often scoff at in motion pictures. I don’t doubt the authenticity of young love, for as I teenager I too found myself head over heels for a certain young cast member in my high school’s production of The Sound of Music. Rather, I doubt that teenagers – and I include myself in this assessment – understand the potentially impermanent, often confusing waxing and waning nature of love, and without this understanding, and the perspective that comes with it, I question whether young love can truly stand the rigors of time, distance, and change. As a result of this, I often greet moments in which teenagers profess their undying love for each other with a sigh that oftentimes betrays my skepticism of what is taking place on the screen in front of me. I was pleasantly surprised then that when seeing Lisa Berndle (Joan Fontaine) bashfully holding a door open for Stephan Brand and hearing that she is in love with him, not only didn’t I doubt it for a moment, but I also sensed that her love for this young man was the stuff of legend, the kind of emotion that great poets write sonnets about and that other men wish they had in their own relationships. If only this young musician, this supposed second coming of Mozart, were truly worthy of such devotion.

We first meet Stephan Brand (Louis Jourdan) as he is in a carriage heading home. With him are two other men, one of whom asks him if Stephan is sure he wants to accept a duel. It is Vienna circa 1900, and dueling with pistols is still the preferred way of settling personal slights. After Stephan gets out of the carriage, one of the men remarks that Stephan picked the wife of the wrong man to have a tryst with, a statement that we later find out is quite an understatement. Despite Stephan’s statements to the contrary, no sooner does he enter his apartment, but he instructs his butler to pack his bags. What stops him is a letter that arrived sometime earlier, in particular its eerie opening greeting, “By the time you read this letter, I may already be dead.” And as Stephan sits down to read the letter, we are taken back in time, to the innocent days of Lisa Berndle’s youth, days full of romantic dreams and unlimited potential.

It is in these days that she meets a much younger and much more promising Stephan Brand, a man whose window she gladly swings outside for hours at a time, practically enchanted by the sounds he produces on his piano. When he stops playing, she startles; when he leaves the apartment, she rushes to open the door for him and then is too bashful to even return his friendly hello. When she begins to believe she is not cultivated enough for him and therefore not yet deserving of his love, she determines to become the kind of woman she imagines he would want – neat, well-dressed, knowledgeable of the great European composers. She describes the times she watches him as her happiest hours, despite the fact that most of the time she sees him entering and exiting with other women. When they finally do go out years later, it is hardly the beginning of the storybook romance she envisioned. Sure, he takes her to a nice restaurant, buys her flowers, dances with her until sunrise, and declares her to be someone he can’t believe he hadn’t met sooner. However, he does all of this without once asking what her name is. To him, she is just one of his adoring fans, one of the many women who happily enter his life only to find out just how temporary his affections toward them really are. Their one romantic night together has an immediate and life-altering affect on her life. The same cannot be said for his.

Letter from an Unknown Woman is fascinating partly for what it reveals about the time in which it was made. At a time in which the Hayes Code was strictly enforced, it is fascinating to see a movie that acknowledges the level of passion that women can feel. Lisa is not a woman who regrets the events of her lone night with Stephan; in fact, it could be said that she sets it in motion, not minding whatsoever that Stephan is a married man. It’s almost as if the night somehow provides her with a sense of closure, that having had him, her dreams are now fulfilled, and she can now live without him, providing of course that he remain a part of her past. It is only when he becomes part of her present for a second time that the life she has worked so hard to create for herself comes crashing down around her - perhaps because true love never dies; it simply gets buried in our subconscious and bides its time before resurfacing.

Letter from an Unknown Woman works because of how much we empathize with Lisa Berndle and because we are perfectly aware of Stephan Brand’s type long before she is. We see her naïveté; we recognize all the hints of the playboy that Brand is and will possibly always be. Yet we never cry out for her to wake up from her fantasy. Instead, we root for her to somehow be successful, no matter what the cost. And we inwardly hope that Brand will open his eyes to the angel he has in front of him, even though we know from the way she opened her letter that this is not likely to occur. It could be said then that Letter from an Unknown Woman is a romantic tragedy, the kind of film in which characters realize only too late what they could have had all along. Perhaps then Lisa’s last breath was Stephan’s first real moment of life. (on DVD in Region 3; currently unavailable in Region 1)

Labels: 3 and a half stars, Max Ophuls, reviews