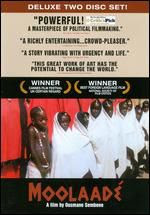 In Ousmane Sembene’s Moolaade, the outside world is both a blessing and a curse. It is the outside world that introduced Islam to the residents of Djerriso, a small village in Burkina Faso, and it is the outside world that provided a place for Ibrahima (Theophile Sowie) to amass the wealth that has brought a certain degree of modernization to the village. I say a certain degree, for despite the presence of wells, radios and a mosque, the village’s roads remain unpaved and there appears to be little in the way of economic opportunity. However, with these positive changes have come unwelcome elements, such as the notion of individualism and the idea that long-held traditions can and should be questioned. The latter is a troubling an issue because many traditions cannot be explained. They have been followed for so long that their real purposes have either been forgotten or labeled taboo and never spoken of, perhaps masking the fact that they serve not to better society but to keep a portion of it in its place.

Moolaade begins with four young girls – Nafi, Oumy, Diatou, and Awa - seeking protection from a woman named Colle Gallo Ardo Sy (Fatoumata Coulibaly). The four girls have run away to escape what is referred to as the Purification, a somewhat pleasant sounding euphemism for female circumcision, which is itself a euphemism for a much more graphic phrase. Colle grants their requests, much to the displeasure of the Salindana, a group of influential women responsible for performing the Purification using nothing more than small crude knives. It is a procedure that almost killed Colle when she underwent it and which resulted in the death of two of her children. Because of this, she refused to submit her daughter Amasatou (Salimata Traore) to the procedure years earlier, a decision for which the Salandana still bear a grudge. They decide to “break” Colle’s will, and the men of Djerriso naturally support this idea. They decree that no man will ever marry a Bilakoro, an uncircumcised woman. This pronouncement affects Amasatou in particular, for she is engaged to Ibrahima, the son of the village chief. Furthermore, the men pledge to find a way to force Colle to end the Moolaade, which apparently can only be ended by the person who began it uttering a particular word. To achieve their goals, the men start by pressuring Colle’s husband Cire (Rasmane Ouedraogo) to assert his authority over his wife. A good man, he nevertheless wilts under pressure. Colle does not.

One of the most fascinating scenes in Moolaade is Ibrahima’s triumphant return to the village. Watching the scene, one would have thought a foreign dignitary or even the president himself had arrived. A village crier announces his every accomplishment and noble characteristic, and every villager comes out to greet him, applauding him as he walks along beautiful silk cloth laid out before him to avoid dirtying his immaculate French shoes. It is something out of Homer’s The Iliad. The adoration though seems to be the result of his financial success, and it is not indicative of any respect for what he has accomplished or learned in the outside world. Soon the Western ideals he returned with are replaced by notions of not rocking the boar and simple going along with the traditional norms that he was likely happy to be rid of in France. One of them involves his father choosing as his fiancée his 11-year old cousin.

In a way, Ibrahima is the opposite of the Mercenarie (Dominique Zeida), an outsider who comes to Djerriso selling everyday items such as clothing, food, and batteries. The Mercenarie, a former peacekeeping soldier, is his own man. He sees nothing wrong with overtly flirting with other men’s wives, and when told of Ibrahima’s decision to marry his cousin calls him a pedophile to his face. He is what Cire and Ibrahima want to be – strong-willed, outspoken, and unafraid. In another world, he and Colle may have made quite a pair. Here, even a simple friendship is denied them.

The depths to which people will go to preserve something indefensible has always amazed me, and as I watched the Salindana scheme to end the Moolaade, I couldn’t help feeling a bit sorry for them. Here is a group of women whose job it is to perform a surgery that could and often does result in death, and yet they react to that possibility with such callousness that one can sense that they have simply gone numb to the suffering the procedure causes. I felt the same way about the men of the village. What can be done for people who accept the deaths of small children as the will of a higher power when it was their own edicts that caused such tragedies to occur? And yet the film offers us hope that change is possible, that through debate, confrontation, and eventually acceptance, people can cast away their old readings of religious dogma and their long-held practices of subjugating woman. Through Colle, other women achieve the strength to stand up for themselves and for those too young or powerless to do so. It’s unfortunate though that it takes them so long to find their voices.

Moolaade is not always an easy film to watch, but it is consistently provocative. My only criticism has to do with the film’s climax, which seems rushed and too idyllic. However, this is a minor complaint about a film that is informative, moving, and superbly filmed.

*Moolaade is in Jula and French with English subtitles.

*Moolaade was released on DVD on February 19, 2008 by New Yorker Films. In February, New Yorker Films quietly went out-of business after its parent company defaulted on a loan. The company had used New Yorker Film’ library of films as collateral. As a result, the company’s entire film catalog is going to be auctioned off at some point in the future. Presently, much of New Yorker Films’ DVD releases, films such as The Eel, Earth, Fireworks, and Kandahar, are listed as out-of-print and are selling at much higher prices than they were just two months ago. I would like to extend my thanks to Daniel Talbot and his staff for working so tirelessly to bring such quality films to theatres and DVD. Your efforts were indeed appreciated, and you will be missed.
Posted by Azrael Bigler at 12:23 AM