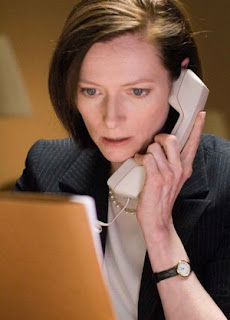 Recently, I was fortunate enough to find a spare two hours to sit down and watch Michael Clayton, and while I enjoyed the film, my first thought upon completing it concerned Tilda Swinton. Perhaps this happened because I watched the film on DVD, long after it had left theatres and after Tilda Swinton had been awarded the Oscar for her performance as Karen Crowder. Whatever the reason, I remember being surprised that she had won the award. This was not because I had a problem with her performance or because I had been rooting for another actress to win that year, but rather because I wondered whether the role of Karen Crowder should have eligible for the award in the first place.

I had the same feeling after watching 2008’s Doubt. That film garnered nominations for two actresses in the supporting actress category, Amy Adams and Viola Davis. By nominating both of them, the academy seemed to be implying that both performances were extraordinary, which they were. However, the duel nominations also implied that the two roles were equal, which they clearly are not. Amy Adams’s character, Sister James, is featured far more frequently than Mrs. Davis’ character, Mrs. Miller, who – if memory serves – is only in one scene. In pondering the importance of screen time to award eligibility, I was reminded of Dame Judy Dench’s role in Shakespeare in Love, which is said to have only used up six minutes of screen time, and of William Hurt’s nomination for his portrayal of Richie Cusack in David Cronenberg’s A History of Violence, a role which was absent from the film until practically the final twenty minutes. Alan Alda’s role of Senator Ralph Owen Brewster in Martin Scorsese’s The Aviator is another example that comes to mind.

My problem with these nominations – and in some cases victories – is that to me the roles do not seem to be supporting role; they seem more like bit parts. While they are definitely more than walk-ons and certainly pivotal to the plot, they are also not on screen for very long. Something is wrong when a list of Oscar nominees reminds me that an actor was in a film instead of making me recall how excellent a certain performance was. Perhaps a new award should be created. We could call it Best Bit Part in a Motion Picture. With this award we could celebrate actors and actresses who made brief but somewhat memorable performances in films. We could even give the award some guidelines. Maybe only characters that appeared on screen for less than thirty minutes would be eligible for this award. That would mean that for a role to be eligible in the supporting category, it would have to be on screen for more than a half an hour.

Of course, there are problems with standards such as these, but to me there is a difference between Judy Dench’s role in Shakespeare in Love and that of Rachel Griffith that same year in Hilary and Jackie. The former is memorable for what it accomplishes in so little time, but is that really what constitutes a supporting performance? Can ten minutes of screen time really be more impressive than fifty?

I welcome your thought on the matter.
Posted by Azrael Bigler at 6:21 AM