Review – A Raisin in the Sun 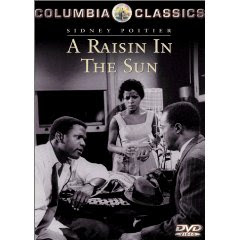 Walter Lee Younger (the legendary Sydney Poitier) may well be the most recognizable character ever to grace the silver screen. What I mean by that is that most of us will watch his struggle to be great and hear his impassioned pleas for the opportunity to prove himself and quietly say to ourselves, “I know someone like that.” Some may even see a piece of themselves in him. Make no mistake about it, though - Walter Lee is not a perfect figure by any stretch of the imagination. He spends his nights drinking and partying, and when he’s not doing that, he’s getting into arguments about who’s responsible for denying him his place in the world, never seeing the connection between his habit of spending his evenings at the Kitty Kat Club and his family’s financial trouble. Yet it is his belief in himself that make him so admirable, the fact that he believes with ever fiber of his being that given the proper financial resources and the freedom to make important decisions, he could amount to something special.

Standing in his way – at least that’s the way he sees it – are the women in his life. There’s his mother, Lena Younger (Claudia McNeil), whom Walter sees as denying him his rightful place as the head of the family. Then there’s his wife Ruth (the equally legendary Ruby Dee), whom he associates with incessant nagging and a general lack of support for his grandiose plans, and finally, there’s his sister Beneatha (Diana Sands). Beneatha is studying to be a doctor, for she sees no reason why she should limit herself to being just a nurse. Such thinking should make her bond with her brother stronger, for he sees no reason why his career should be determined for him either. However, they spend much of the movie arguing, for Walter sees Beneatha’s pursuits as being partially responsible for his own dreams remaining unfulfilled. Rounding out the family is Travis, a young boy who sleeps on the couch because the family’s apartment is too small for him to have his own room. Others will visit their apartment during the course of the film, each of them bringing with them unique perspectives and various motives. Two of them, Joseph Asagai and George Murchison, are Ruth’s suitors. Another is Mark Lindner, who delivers the Younger’s the message that while the times are indeed changing, there is still a ways for them to go.

The central issue in Daniel Petrie’s 1961 film A Raisin in the Sun involves a one-time $10,000 life insurance payment that Lena Younger receives after the death of her husband, Walter Lee Younger, Sr. The money represents the family’s one chance to change their lot in life. To Walter, it is the key to his entrepreneurial dreams; to Ruth, it offers a chance for the family to move to a real home of their own; to Beneatha, it represents the completion of her education. However, there is more going on in A Raisin in the Sun than the pursuit of individual goals, for I believe the film, and the play that it is based on, is ultimately about a generational change that for some families had the potential to tear them apart - the change from thinking collectively to thinking individually, from holding tightly to those things that give us order and serenity to grasping for those things that give us a long-lost sense of self and belonging or at the very least a distraction from the dead end lives people think they are leading.

And very little is safe from this change, not life, not culture, not even God. One character wonders whether it is better to bring a new life into the world or to ensure that the rest of the family can eat by terminating the pregnancy. Another character turns away from God and towards the African continent for solace, despite the fact that most of what she knows about Africa comes from the lectures she attends, the books she reads, and the phonographs she plays on her record player. She takes such great pride in this part of her ancestral history that she takes every occasion that arises to remind her family that she is not “an assimilationist.” Her interests, as well as her sentiments, are understandable, for after five generations of her ancestors struggled and toiled just to prove that they belonged in their home country, it was human nature for her and others like her to wonder if it was all worth it and to seek that longed-for sense of home somewhere else. Perhaps this is why so many adopted children eventually seek out their birth parents and in some cases, the land of their parents and ancestors.

A Raisin in the Sun is simultaneously timeless and dated, which in this case is not necessarily a bad thing. The timeless aspects of the film speak to us about the universal necessity for freedom and opportunity, about the part of all of us that longs to risk it all, if only to prove that we have it in us to do so. It is about a quest for belonging that resonates as loudly today as it did forty-eight years ago. And yet it takes place during a time of great discrimination, a time when people feared the kinds of changes that would inevitably come. In the film, neighborhoods are segregated because that’s the way it’s always been. And because it’s always been that way, it’s what people feel comfortable with. It would take courage for people to face their discomfort and change the status quo. A Raisin in the Sun provides us a glimpse of just how hard it was for some to muster up that courage. And yet this is indeed what people like the Youngers did, and because of their achievements the discrimination that we see in the film, while still existing in some areas of the United States, is thankfully not common throughout it.

A Raisin in the Sun is a rather faithful rendition of Lorraine Hansberry’s play. All of the key characters are there, although I seem to remember a somewhat controversial but brilliant speech about violence that did not make it to the screen. Its absence is unfortunate. In addition, some of the characters’ actions seem more appropriate for the stage than for the silver screen. I’m speaking primarily of scenes such as Walter’s drunken spear dance and way Walter seems to be talking to a character that is not present towards the end of the film. However, these moments, despite their somewhat forced nature, do shed light on the characters of the people involved, helping us understand who they are and how far they’ve come by the end of the film. That journey is fascinating, heartbreaking, and ultimately life-affirming. (on DVD)