Review – The Thief of Bagdad 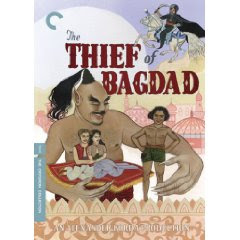 The Thief of Bagdad takes place in a world in which a genie that had been locked in a bottle for two thousand years willingly gets back in the bottle so that he can prove to a young thief that he has decided to crush with his overly large feet that he was in there in the first place. The scene is designed to make viewers appreciate the cunningness of Abu (Sabu), and I suspect that in any other film I would have found the scene laughable instead of clever. Sabu shouts his lines a little too much and seems too desperate to live to make me believe the genie would interpret Abu’s questions as anything but a diversion. However, I suppose if I can accept that the genie was in the bottle in the first place, I can accept that a young man could trick him back into the bottle. After all, by this time in the film, I’d already seen a man blind a prince by casting a spell on him, the same man transform a young boy into a dog, a princess whom the residents of Basra are forbidden to see on punishment of death, and a Sultan so obsessed with toys that he trades his only daughter for one. So like I said, accepting that a genie could be coaxed back into a bottle turns out not to be that hard.

Simply put, the 1940 version of The Thief of Bagdad is a wonder to behold. As the film opens, we’re privileged to see Bagdad in earlier days, bright and colorful, and home of one of the most bustling seaports I’ve ever seen. (I should mention though that its residents still consider their leader to be a tyrant.) There, some people work diligently to prepare a ship for departure, as others sing a song of respect to the sea. Later, we will see Basra, a city whose streets are replete with merchants and food stalls and where even a person who calls you the “Master of 1,000 fleas” still ends with a pleasant, “Allah be with you.” It is in Bagdad that we first meet Jaffar (Conrad Veidt), a figure who stands in plain view of everyone, making it more than apparent exactly who is calling the shots. The arrival of Halima (Mary Morris), a similarly cloaked woman, stirs Jaffar, and the two of them speak to each other of two peculiar characters: a princess who lies asleep and can only be awoken by her true love and a blind man (John Justin), whom Jaffar instructs Halima to deliver to him. Apparently, it is the blind man who can awaken the princess from her long and deep slumber.

The blind man accepts an offer of food and shelter from Halima, and soon he is seated between a crowd of beautiful, tantalizingly-dressed women who make it known to the man that there is a great deal they can offer him. Ever the gentleman, the blind man politely declines their offer, explaining that his heart will always belong to another. From there, he weaves a story of betrayal, friendship, love, and loss, not knowing that very soon he will awaken the woman of his dreams, only to lose her again to the very man who caused his own fall from grace.

I’m making this sound too melodramatic, as if it were a Shakespearean tragedy, which it is far from. Rather, The Thief of Bagdad is many films rolled into one. It is simultaneously a musical, an adventure, a romance, a revenge film, and a buddy film, although I must say it doesn’t succeed very well at being a musical. There are too few musical numbers and the ones that are in the film are not particularly relevant to the plot or emotionally rousing. However, all of the film’s other elements work like a charm. I especially liked the friendship between Abu and Ahmad, the blind man. In many others stories, former princes get up on their soapbox and refuse to abandon righteous notions of truth and honesty. In this film, Ahmad accepts his friend’s thievery quite easily and happily partakes in the splendors it brings them. After all, he must figure, they do have to eat. When romance enters the film, it does so in a very logical way, considering the world in which they live. Ahmed and the Princess, neither of whom it seems have had any experience with someone of the opposite sex, meet and fall head over heels in love. Their love is the kind one normally finds in these kinds of films, strong, permanent, worth endangering one’s life for. It is also one that is quite easy to root for.

In a film with a princess in danger and the man of her dreams on a mission to rescue her, it is rare for neither of those characters to be the central character. However, The Thief of Bagdad is such a film, for as brave as Ahmad is and as steadfast and strong as the Princess is, it is Abu whom destiny has chosen to immortalize, so therefore, it is he who must have the courage and the wit necessary to outsmart all of their enemies. And yet, as interesting as that plotline is, it is upstaged by Jaffar’s illogical but somehow moving struggle to resist the temptation to take the easy way out and simply put the Princess under his spell. After all, this is a man accustomed to getting what he wants, a man who has seized power from Ahmad, blinded him, turned his friend into a dog, and crushed the Princess’s hopes of marrying the man of her dreams, and yet there is that part of him hoping that given enough time the Princess will love him on her own. Normally, such aspirations would evoke a rather mocking sigh of disbelief, but Veidt is so good in the role that you never doubt Jaffar’s sincerity.

The Thief of Bagdad remains an impressive film even though some of the film’s special effects have lost their ability to impress. In many scenes, it is clear that the backdrops have been added on, creating moments in which suspending disbelief completely is a bit of a challenge. However, even today, one cannot help but be impressed by the colors, sets, and camerawork of the film. The scene in which the Genie (Rex Ingram) is released from captivity to this day remains quite impressive. As does the film as a whole, I must say. The Thief of Bagdad, like the original King Kong, retains its ability to amaze and awe viewers. It has been said that it was producer (and one of its six directors) Alexander Korda’s goal “to do with live actors what Walt Disney does with drawings.” I’d say he succeeded. (on DVD from both MGM and the Criterion Collection)

Labels: 4 and a half stars, Alexander Korda, reviews