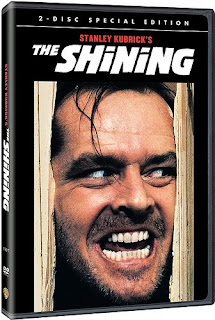 Good horror films are tough to make. I say this because far too often what begins as horror devolves into rather uncomfortable comedy. I remember watching Scream 2 and being completely involved in the story until the killer makes an appearance and David Arquette’s physically challenged character “Dewey” valiantly leaves the woman he loves to deal with the killer himself once and for all. I could heard several audience members chuckle and a few others mutter an incredulous, “What?” In a movie about characters who know the horror genre inside out, Dewey’s actions seemed utterly ridiculous, and, sure enough, pretty soon, Dewey found himself on the receiving end of the killer’s knife, something that at that point in the movie was no longer unexpected. Other horror films ask viewers to accept that certain conditions exist in the world or the times in which the films take place - an immortal sucks blood and can turn into a bat, someone becomes a wolf when there is a full moon, an indestructible killer will only bother people if they intrude upon what he considers to be his territory. The list is endless. As long as a horror film is consistent with the conditions that it establishes early on, it can be considered believable within the context of the film.

Here are just a few of the conditions that one must accept for Stanley Kubrick’s 1980 film The Shining to be believable: A form of telepathy exists, but only a small number of people have the ability to use it, entities that can live within someone are also real, and some people are able to see ghost and apparitions. Dealing with just one of these conditions could be a challenge for a character, yet in The Shining, all three of them are given to one character, a young boy named Danny Torrance (well-played by Danny Lloyd). Danny can communicate with others without using words, seems to have a spirit named Tony living inside him, and continues to see the frightening image of two sisters whose father went crazy one winter, killing himself, his daughters, and his wife in a severe case of “cabin fever.” Danny’s father Jack (Jack Nicholson), upon hearing of this tragedy, assures his employers, the managers of a hotel in Denver called The Overview, that he won’t have such problems.

In fact, on the surface Jack seems perfectly suited for his new job looking after a vacant hotel during the winter months, for the job would give ample him time to write the novel that’s been eluding him of late. During the film, we see him sitting at a typewriter desperately trying to come up with an idea for a novel. At other times, however, when ideas are scarce, we see him playing a variation of handball to pass the time. The process takes a toll on him, and soon he is berating and swearing at his wife Wendy for not understanding what it takes to be a great writer. His abrasive behavior is meant to contrast with his earlier calmer, more respectful demeanor. This would be effective if it weren’t for the oddly formed smile that comes upon Jack’s face during several scenes in the first part of the movie. That smile hints at a problem lying just under the surface, and as we later learn, this family is indeed dealing with some serious trust issues caused by an unfortunate incident in which Jack injured Danny during a fit of anger and alcohol intoxication. A month after moving into the hotel, Jack finds himself talking to the hotel’s deceased inhabitants, proclaiming that he wants to live there forever, and deciding to eliminate his family. This element of the story is certainly interesting, but it unfortunately prevents Jack’s character from being able to completely go from nice guy to villain, an arch that allows viewers to feel that a tragedy has taken place when such a change occurs. Because Jack already has problems and at times seems annoyed by his wife and son, his descent into violence is not as shocking as it should be.

As the film progresses, some of the conventions that the film establishes early on begin to break down. For example, what had previously only been visible to Danny is suddenly visible to Wendy as well. In addition, some ghosts have physical forms, while others don’t. This is especially convenient for Jack who is trapped one moment, yet free the next due to a ghost’s amazing ability to open a locked door. In addition, The Shining also contains moments of incredibly illogical behavior. One of them involves Wendy, an otherwise protective mother, deciding to take a nap after locking Jack, by then truly insane and admittedly homicidal, in a storage room. I don’t know anyone who could sleep with a killer in the same building, even one seemingly trapped. Later Danny shows a level of intelligence far beyond his years as he is being pursued through the maze outside the hotel. However, the film has not established Danny as having this kind of intuition. Some may argue that it was “Tony” that did this, but bear in mind that “Tony” went around repeating "redrum" over and over as if it were an actual word in English.

I find myself split over The Shining. I liked the way the film began, with a rear aerial view of the yellow Volkswagen that Jack Torrance is driving to his job interview. It’s as if something mysterious is following him wherever he goes. I also liked most of the characterization given to “Tony,” especially the way he communicates openly at times but flees at others. Equally interesting is the way the movie allows Danny to exhibit the same traits. In addition, I was mesmerized by one pivotal conversation that takes place between Danny and the hotel’s chef, Dick Hollorann (Scatman Crothers). It’s unfortunate that the rest of Mr. Hollorann’s role in the film follows a predictable pattern and too closely resembles that of Sherriff Buster in Rob Reiner’s Misery, which, it should be said, came out ten years after The Shining. I also disliked the way the film’s soundtrack makes it rather obvious when something weird or scary is about to happen. If a moment is truly scary, there is no need for musical accompaniment.

The Shining moves slowly for a horror film, which is not necessarily a bad thing. However, much of what happens in the film is never fully explained. We’re simply shown a photograph at the end of the film and expected to understand all that has transpired based on that one photo. It’s a good technique if it works. In this film, I’m just not sure it does. The Shining tries hard to be suspenseful and terrifying. It ends up only being puzzling and somewhat unsatisfying. (on DVD)

I appreciated this review very much. Thank you for sharing your personal belief background and thoughts as well as your movie reviews. michele cogley