Review – Springtime in a Small Town 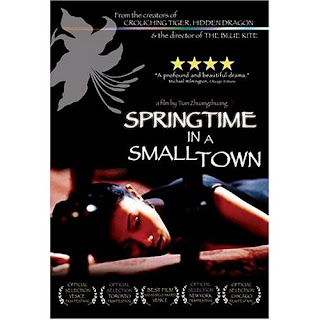 We all have our own version of the one that got away, that special person that - in our mind at least - was perfect for us, but slipped through our fingers. A realistic examination of the events that led up to the break-up or of the reasons for two people not coming together in the first place would probably reveal the truth, that they were simply not the right match. However, in many instances, reality seems eerily deceptive, and the fantastic world of “what if” just seems that much more appealing. We defend this version of events by saying, “We were perfect for each other, we would have worked out, and if we just had one more chance, we would prove to the world the everlasting power of true love.” If only life were that simple. In truth, such sentiments seldom simply appear out of nowhere. Rather, they are often the byproduct of unhappiness, of a situation so disappointing to us that we long for this other, more idyllic person and cling to the belief that at one time we had perfection and let it slip away.

So what would we do if the opportunity we had been dreaming of was suddenly a reality? Would we jump at the chance to be reunited, forsaking all of our responsibilities, and steal away together, or would we reject the opportunity and continue our mundane routine in the vain hope that it would someday improve? This is the dilemma facing a young woman named Yuwen (Jianfan Hu) and her former boyfriend Zhang Zhichen (Bai Qing Xing) in Tian Zhuangzhuang’s moving 2002 film Springtime in a Small Town, and it is clear from the start that they do not know what the correct course of action is.

Zhang and Yuwen’s reunion is completely unplanned. As the film begins, it has been ten years since they last saw each other, and their last moments together had not been picturesque. He had asked what she would do if he asked her to come with him; she had acted indifferently. And so he went. Two years later, she married Dai Liyan (Jun Wu), and as she explains, she “forced herself to love him.” It doesn’t appear to be working anymore. Years of hardship, war, and now illness have taken their toll. Early in the film, we see evidence of the distance between them. He looks at her when he talks to her; she looks away from him. He tries to be sweet; she acts cold. In frustration, he throws the medicine she brought him onto the ground. She simply walks away and begins embroidering. We later learn they have been sleeping in different rooms for a few years.

Did Yuwen know Liyan and Zhang were friends when she married him? It’s hard to say. Zhang appears shocked at seeing her, while she remains remarkably calm. What is clear is that Liyan does not know about his wife and Zhang’s past relationship. In an effort to conceal it, Zhang explains that they were friends and neighbors, and Yuwen says nothing to contradict this statement. Later, Liyan begins to entertain the idea of Zhang marrying his sixteen-year-old sister Xiu, who has quickly developed a crush on Zhang. The fact that Zhang is 30 does not seem to be an issue. While Western audiences may have trouble accepting a man trying to match his teenage sister with a man fourteen years his junior, the fact is that matches such as these have been made throughout history. The question of whether they are right or wrong is inconsequential.

Watching Zhang and Yuwen is like watching two nervous people trying to ask the other to dance, for they both want to dance with the other, but they periodically lose the nerve to make it happen. And so they tap dance around the issue. One initiates a serious conversation; the other avoids it. Later, they switch roles. When one finally speaks from the heart, the other recoils and quickly turns the conversation to what can best be described as small talk. When options are finally discussed, it’s no surprise that one rather macabre observation is made. In another film, such a discussion would be the beginning of a series of rather immoral acts. Here, it’s simply a statement of fact. It is mentioned once and never again.

Throughout the film, we see views of the area surrounding Liyan and Yuwen’s house. The trees are barren, except for a few short, low-lying trees with bright red leaves on them, and everywhere one walks one can see reminders of the war. Bombed-out walls line the small streets that separate what used to be occupied houses, and the empty streets hint at the losses the area has sustained. Reconstruction does not appear imminent, almost as if the area is being permanently neglected. It is therefore the perfect metaphor for Liyan and Yuwen’s marriage. It could be fixed, but it seems neither of them has the inclination or the know-how to start the rebuilding process.

One of the most impressive aspects of Tian Zhuangzhuang’s filmmaking technique is that he allows scenes to play out and doesn’t force anything upon his characters. If they are going to confront each other, it is going to be on their time, not ours. And just like real people, they stop themselves, just as they could be about to have an important conversation. Perhaps some things are better left unsaid, or maybe the sentiments that would be expressed in such a discussion are not yet ready to be revealed. Because of this, the film will undoubtedly feel slow to some people. Others however will feel deeply moved by the film and appreciate the director for allowing the situations in the film to play out in a realistic manner, a sentiment that describes my own feelings towards the film.

Tian Zhuangzhuang’s remake of the 1948 classic film Spring in a Small Town marked his return to directing after a nine-year absence. His previous film The Blue Kite had touched a nerve with someone in the government, and as a result, he had been banned from filmmaking. At the time, it was said that the ban was for life. It’s good to see that that wasn’t the case. With Springtime in a Small Town, Tian once again shows why he is such a revered figure in Chinese cinema. (on DVD)

*Springtime in a Small Town is in Mandarin Chinese with English subtitles.
Posted by Azrael Bigler at 10:06 AM