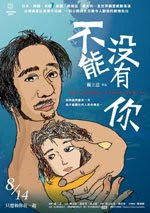 “This is an unfair society.” These are just a few of the words that slip out of Li Wu-Hsiung’s mouth as he hangs precariously from the side of a road overlooking a freeway teeming with rush hour traffic. In his arms he holds his seven-year-old daughter Mei. Her arms drapped around his neck, her head resting on his shoulders, she does not appear afraid at all, as if she somehow completely comprehends the hopelessness that undoubtedly led her father to be where he is at this moment. And just what are we to make of this situation? After all, a father threatening suicide is bad enough; a father threatening to take the lives of both himself and his daughter is quite another thing entirely. Surely his actions reveal him to be some kind of horrendous monster, don’t they? If only things were that simple.

Surrounding the man are reporters hungry for the scoop, police officers trying their best to do their duty and talk him down, and morbid onlookers shading their eyes to get a better look at the tragedy that is about to transpire. On the other side of Taiwan, in the city of Kaohsiung, a crowd has gathered around a television witness for themselves how it all ends. Some people in the crowd call Li a criminal; some accuse him of just wanting to garner publicity for himself; others just seem to be frustrated by Li’s hesitation. Just jump already, one particularly callous one calls out, so that we can get back to work.

And then, suddenly, just like that, we are swept back in time, back two weeks to a harbor somewhere in Kaohsiung, to a run-down shack occupied by a loving father and his reticent daughter. The two don’t talk much, yet all one needs to do is watch the way young Mei’s eyes follow her father as he disappears from sight into the murky waters of the Atlantic Ocean. It is down there that he tightens the bolts and cleans the propellers of what appears to be an ocean cruiser. It’s a thankless and rather dangerous job, especially considering the inadequate antiquated equipment that Li uses, and yet it is what he must do to at least provide the barest of necessities for his daughter. Seeing the two of them together, it seems inconceivable that this could be the same man that we saw a moment ago threatening to commit double murder. And therein lies the power of Leon Dai’s 2009 film No Puedo Vivir Sin Ti. It takes an incident that no doubt many of us would be quick to make up our minds about if we saw it on the evenings news and asks us to take a step back and witness all that led up to it. I’m not suggesting that you will condone Li’s actions by the end of the film, but you will certainly understand just what his presence on the side of the freeway represented.

We soon learn that Li and Mei have been on their own for two years, that Mei’s mother ran off and hasn’t been heard of since, and that because Li and Mei’s mother, Chang Ming-Hsiu, were never married, Li does not have the legal right to register Mei for school, which, by law, Mei must be enrolled in. To add insult to injury, that right partially belongs to a man that neither Li nor Mei have ever seen, Ming-Hsiu’s husband, Hsieh Nien Tsu. As it becomes increasing clear that Li and Mei are in danger of being separated, Li’s longtime friend Tsai suggests Li ask a government official who was a childhood classmate of theirs for help, and so Li and Mei set off for Taipei in the hopes that they will find the solution they are desperately seeking there.

No Puedo Vivir Sin Ti presents an honest portrayal of modern-day Taiwan. There are the affluent, and there are the destitute. There are those who appear willing to bend the rules, and those who adhere to them as if they are what bind society together. To this group, long-established rules are iron-clad, and no sob story, how matter how remorseful it is, can ever be justification for making an exception. The group is, in essence, a collection of followers, and when most of the people who have the power to help you are followers, it does not bode well for an individual whose case would ordinarily make people acknowledge the need for radical change and sympathy. It is not surprising then that people like Li and Mei can sometimes fall through the cracks.

And so just what should society’s response be to a man like Li? No Puedo Vivir Sin Ti does not directly answer that question, but it stirs questions in us. Are people correct in making a snap judgment as to the moral character of a man threatening his own daughter’s life? Are all of the judges warranted in ruling the way they do regarding Li’s case? Perhaps they are. But are severe punishments and moral high grounds really the best way to handle problems such as Li’s? Wouldn’t society be better if it treated more things as “special situations”?

As I write this, No Puedo Vivir Sin Ti has played in Taiwan and been screened at a number of film festivals, but unless it is successful in its bid for an Oscar nomination, a great challenge for a number of reasons, none of which have to do with the quality of the film, it may not be available in too many other places. This would be a shame, for the film deserves a wider audience. Along with being well made, the film has one of the most interesting structures I’ve seen in a film in a while and builds to a emotionally powerful conclusion. In addition, it contains effective, realistic portrays of very complicated characters and has more heart than most films in theaters presently. With No Puedo Vivir Sin Ti, director Leon Dai establishes himself as a gifted storyteller and an effective filmmaker. I am eagerly looking forward to his next project. (on DVD in Region 3)