Review – Somewhere I Have Never Travelled 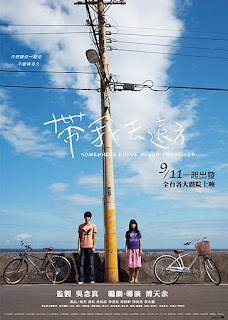 Somewhere I Have Never Travelled – Taiwan, 2009

When I was about five, I had what I believe was my first eye exam. I remember putting a cup over my left eye and being asked to read a line on the standard eye chart. No problem there. Then I was asked to cover my right eye and read a different line. I calmly explained that I couldn’t see anything. This response was greeted by an expression of surprise, and I was asked if that was indeed the truth. I said it was and was soon thanked with a smile and sent on my way. My mother was soon informed that I was essentially blind in one eye, and very soon, I began wearing a patch in an effort to strengthen my much weaker left eye. I remember receiving occasional awkward glances or hearing a few sarcastic pirate sounds when I walked down the street, but I don’t remember anything too hurtful. Perhaps I was lucky, but I’ve always been grateful to that nurse for making me feel that my poor eye sight was a rather trivial matter. It was not something to gasp over, not something that needed a second opinion on, and not something that needed to be verified again and again.

This is unfortunately not what happens to a young girl named A-Kuei in Fu Tianyu’s interesting 2009 film Somewhere I Have Never Travelled. A-Kuei (Li Yun Yun/Yo Hsin) is at first believed to just be different from other children, and apparently the cure for “being different” in her family is for a Buddhist monk to come over and chant, a practice we hear referred to as “ghost busting.” The monk then announces his finding: The young girl’s soul is gone. A strange diagnosis indeed, but he assures the family it will return in time. This diagnosis supposedly explains why A-Kuei is almost hit by a truck as she is crossing the street and why she buys green tomatoes when her grandmother specifically asks for red ones. Eventually, the correct diagnosis is delivered. However, it comes after one of the most painful exchanges you’re likely to see between a student and a school nurse. It is so jarring that eventually A-Kuei simply shuts down, her eyes revealing her great shame in having a “problem.”

At the same time, her older brother, A-Xian (Lin Bo-hong), is coming to terms with the fact that he too is “different” from other people, for he, like many other characters in Taiwanese movies these days, has discovered that he is not attracted to the opposite sex. This is not a development that he feels he can share with most of his family, and so he begins to yearn for a time when he can escape with the one he loves to a place where he’ll feel accepted. Ironically, A-Kuei begins to have the same yearnings. A-Xian sets his sights on New York; A-Kuei begins to dream about travelling to an island near the Marshall Islands that is said to be inhabited exclusively by people who are colorblind.

Somewhere I Have Never Travelled wisely steers clear of the obligatory emotional - and perhaps unrealistic - coming-out scene. A-Xian obviously doesn’t think his family will accept his sexual orientation, and therefore he keeps it a secret from every one except his sister, who is unfortunately a little too young to know how to deal with it. In truth, A-Xian’s role in the film is actually much smaller than one would imagine, for more of the film is devoted to A-Kuei. In a different setting, this would perhaps be the wrong focus. However, here’s just a sample of the things A-Kuei has to deal with – a grandmother who frequently complains about having to take care of her and repeatedly brings up the fact that she would get a lot of insurance money if something tragic happened to her (no, she’s not planning anything), a father who is an alcoholic, relatives who put her down because she can’t read well, and a teacher who, when A-Kuei mistakes green for red, asks, “Do you have to be so fashionable?” instead of trying to find a way to help her. Moreover, A-Kuei has to listen to people in her own family speak of her future as if it’s hopeless, as if the fact that she is colorblind also says something about her mental intellect. No child should have to hear such things. It’s no wonder she dreams of being somewhere else.

Somewhere I Have Never Travelled is hurt by its sometimes awkward pacing, possibly a result of trying to juggle two storylines at the same time with a rather short running time. The film also does a poor job of making viewers understand many of the supporting characters in the film. It’s clear that the family is struggling financially, but that fact does not adequately explain the amount of negativity we hear coming from them. At times, it seems as if everyone but A-Kuei, her brother, and their father (Li Yung-feng) were born without an ounce of kindness in their bodies. This may be what was intended, yet in a film in which the two lead characters say very little, it can get very tiresome hearing puts-downs and accusations over and over again. However, what saved the film for me was A-Kuei. She is such a sweet character that I found myself hoping against hope for the Hollywood-like ending that I knew was not likely to come. In addition, the relationship between brother and sister is well-developed and heartfelt. They know and accept the other’s differences. If only everyone did the same. (on DVD in Region 3)

*Somewhere I Have Never Travelled is in Hoklo and Mandarin with English subtitles. The subtitles occasionally change too quickly, and far too often, they contain grammatically incorrect translations.
Posted by Azrael Bigler at 8:43 AM