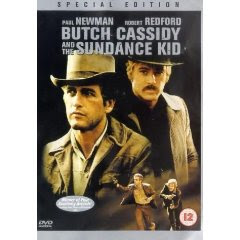 Butch Cassidy and the Sundance Kid (U.S., 1969) – In one of my earlier reviews, I mentioned that I was not a fan of the gangster genre, seeing as how there are rarely any likeable characters in those films, a fact that often prevents me from taking a personal interest in the fates of the characters. I will admit that I felt a similar tinge of indifference as I began to watch George Roy Hill’s 1969 film Butch Cassidy and the Sundance Kid. After all, the film is about two train/bank robbers who, despite their likeability, leave a path of ruin and emotional scars in their wake. And yet the lead characters in the film have something that other characters like them don’t – a sense of their own impermanence. Time is simply not on their side. Bank security has improved, the next generation of thieves is eager to replace those that came before them, and the long arm of the law seems to be closing in more and more every day. In fact, for long stretches of the film, Butch and the Kid are on the run, a rarity in Westerns.

The film details the last stage of their partnership. Butch (Paul Newman), as he has always been, remains the one responsible for ideas; the Kid (Robert Redford) provides the enforcement. Together they lead a group known as the Hole in the Wall Gang. Much of the film has to do with events that occur after they just happen to rob the same entrepreneur a few times, and he hires a posse to track them down and bring them to justice. Butch and Kid evade them time and again and eventually decide its best to find a new place to continue their line of work. Along with them for the ride is Etta Place (Katherine Ross), a young schoolteacher in love with the Kid (and possibly Butch as well). The film is consistently interesting, benefiting greatly from a script that presents Butch as being one of the more affable people you’ll ever come across and the Kid as being serious but well capable of matching Butch’s witty one-liners with his own. This combination of humor, suspense, and fate eventually won me over, even if I didn’t completely believe that the characters would say the things they say at the moments that they say them, and I soon began to see the events in the film as being symbolic of the end of the Wild West. Butch Cassidy and the Sundance Kid is a good film, although not a great film, about two interesting people who just happened to be on the wrong side of the law. (on DVD)