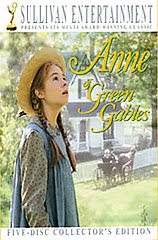 I first saw Kevin Sullivan’s version of Anne of Green Gables in my seventh grade class at Mount St. Mary’s catholic school. I remember enjoying it then even if I didn’t completely accept Anne quirks and eccentricities. Looking at it again twenty five years later, I was still impressed by the story and a bit more accepting of Anne’s personality. As played by Megan Fellows, Anne is an imaginative girl who loves to talk and has a way of looking at the world that is both poetic and beautiful. In Anne’s world, deep within everyone – even the most hard-hearted of people – is a decent and loving person just waiting for the right words or circumstances to release him.

The 1985 series takes viewers from Anne Shirley’s arrival in Green Gables to her completion of a teacher-training program. During this time, she meets Gilbert Blythe (Jonathon Crombie), who is to be first her tormentor and competition and then her good friend, and Diana Barry (Schyuler Grant), who rapidly becomes best friends with Anne until Anne accidentally causes her to get drunk. Luckily, their friendship eventually recovers. Anne also finds a kindred spirit in Marilla Cuthbert (Colleen Dewhurst) and a friend is Marilla’s brother Matthew (Richard Farnsworth). The relationship between Marilla, Matthew, and Anne is one of the best parts of this series. The 1987 sequel sees Anne deal with changes. Friends get married, friendships become harder to maintain, and Anne must cope with people’s expectation that she will eventually marry Gilbert. Instead, Anne takes a teaching job quite a ways away from Green Gables and must turn around a group of spoiled girl from rich families. It is a task that she turns out to be very well suited for. At the same time as she is hard at work instilling the girls with kindness and a love of English literature, she has time to bring two women out of their shells and set a negligent father on the right path. It is also in this part of the story that Anne experiences love for the first time.

There is a certain degree of predictability to Anne of Green Gables. There are always temperamental personalities that need saving, and Anne seems a bit too perfect at times. Her only “vice” appears to be wanting to be successful and happy in life instead of just a dutiful wife, which many women, including Diana, around her appear to be becoming. However, Anne’s positivity is infectious, and her relationships with Gilbert, Diana, and Marilla are heartfelt enough for viewers to become deeply involved in the events they are witnessing.

The series veers slightly off course when it takes Anne and Gilbert away from Green Gables and places them in New York in the 2000 sequel. Marilla, Anne’s friend and guide through life, has died, and her presence is sorely missed. What was magical about Anne’s adventures in and around Green Gables is mostly absent in New York. In fact, the New York in this series seems filled with uncaring bureaucrats, doctors with misplaced priorities, and sexist publishers who speak with apparent pride about having never published a female author. Instead of changing those around her, Anne is reduced to editing other people’s work and trying with all her might to get her own stories published. As for Gilbert, he is stuck working at a prestigious hospital where doctors judge a patient’s worth by how large his bank account it. There’s even a moment when the head doctor gives Gilbert a speech about those patients that are worth savings and those that aren’t. Eventually, Anne and Gilbert decide to leave New York, thereby preserving their pride and humanity. However, they leave without Anne having successfully worked any of her magic on the people that she came in contact with. One wonders then what the point of the excursion was. The series eventually becomes a bit like 2004’s A Very Long Engagement, as Anne travels through war-torn France looking for Gilbert, who goes missing after enlisting in the First World War. Anne once again proves to be resilient and admirable in the face of adversity; however, her gift was her ability to see the good in others. In France, she has no opportunity to put this talent to use, so instead we see her helping injured soldiers, caring for an infant child, and trying to help a friend working for the British government. Her adventure is interesting, but it just doesn’t seem like Anne of Green Gables. The magic is simply not there. (on DVD)

*I should warn you that the version of Anne of Green Gables that I watched (which is not the one pictured above) did not appear to have been remastered. In addition, many customers on Amazon.com have complained about the quality of the picture, as well as about the lack of English subtitles. The DVDs I watched indeed contained these problems. The first two series are rather grainy, and there are several moments when the film’s soundtrack completely drowns out the actors. It is disappointing, but at least the series is on DVD. Personally, I’d rather have an unsatisfying release than none at all.
Posted by Azrael Bigler at 9:03 AM

Labels: 3 and a half stars, Kevin Sullivan, reviews