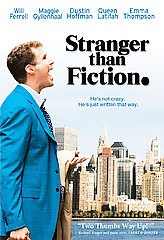 Marc Forster's Stranger Than Fiction is the kind of film that Hollywood should make more of – smart, original, unpredictable, and romantic. The story follows an IRS agent named Harold Crick (Will Ferrell), a man who leads a normal yet lonely life until he suddenly begins to hear a mysterious female voice talking about him. Dustin Hoffman co-stars as a literature professor who Crick goes to after he becomes convinced the voice in his head is actually narrating a story in which he is the central character. Emma Thompson plays Karen Eiffel, an author who hasn’t published a book in ten years and who has a penchant for killing off her lead characters at the end of her novels, and Maggie Gyllenhaal plays Ana Pascal, a young talented baker who Crick is assigned to audit. Ferrell and Gyllenhaal have excellent chemistry, and their relationship comes across as realistic and heartfelt. One of the most impressive aspects of the film is the performance of Will Ferrell. He hits all the right notes as a man realizing the need to take control of his own life and makes us care for Harold Crick. Towards the beginning of the film, one may wonder what makes Crick interesting enough to be the lead character in a novel. By the end of the film, it’s impossible to imagine him being anything else. Stranger than Fiction is a truly original work. (on DVD)