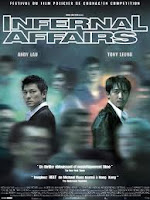 If you needed further proof of the insanity of the Oscars, look no further than the nominees for Best Foreign Film in 2004 – The Barbarian Invasions (Canada), Evil (Sweden), The Twilight Samurai (Japan), Twin Sister (the Netherlands), and Zelery (the Czech Republic). In mentioning these films, I am not making a comment about the quality of the films nominated, for in truth, I have only seen two of the films listed above. However, I would like to point out one glaring omission, glaring simply because the remake of it was thought of so highly by the Academy that it was declared the best film of 2006. In fact, looking at the voting record of the Academy as a whole, the omission is not surprising. The Academy tends to favor foreign films that are slightly light-hearted or not very controversial over fast-paced films or ones with much darker undertones. Consider these decisions: Mediterraneo over Raise the Red Lantern in 1992, Belle Epoque over Farewell My Concubine in 1994, Nowhere in Africa over Hero in 2003, The Sea Inside over Downfall in 2005, and Tsotsi over Paradise Now in 2006. And who can forget that a recent film that has come to be regarded by many as one of the best films of all time was not even nominated for Best Foreign Film, that being 2002’s City of God? Therefore, given its track record, I’m not surprised that the Academy passed over the film Hong Kong submitted for the 2004 Academy Awards. A foreign film like Andrew Lau and Alan Mak’s Infernal Affairs was probably just not their cup of tea. Their loss.

Infernal Affairs is the story of two young men, each assigned to become a mole. As a young man, Kin Ming Lau (Andy Lau) is placed in the Hong Kong Police Department by Sam Hon, the head of a Hong Kong Triad. His job is to rise in the department and one day help Sam’s business remain unobstructed. The other young man, Chen Wing Yan (Tony Leung), is recruited during his initial police training for a long undercover assignment. It is supposed to be three years. However, towards the beginning of the film, we learn that it’s already been six. In order to maintain his cover, his assignment is known by only two men, one of whom has recently passed on. Yan’s ultimate goal is to integrate himself into Sam’s gang and help bring him down.

All of the details above are explained extremely quickly at the start of the film. This is a wise approach, for it leaves the majority of the film’s running time for the intense cat-and-mouse game that follows. In the first major scene, we see one mole sending information to his boss at the Hong Kong Police Department while the mole in the police department tries his hardest to warn Sam of the police’s every move. It’s a very tense scene, and by the end of it, each of the moles has become aware of the other’s existence. In a nice touch, the mole in the police department is the one eventually assigned to find out who the leak is.

There are two female characters that deserve mentioning. Neither of the characters is given much screen time, but their presence is important nonetheless. The first is Lau’s girlfriend, Mary (Sammi Cheng). She decides to write a novel about a character with twenty-eight personalities who becomes so confused about his identity that he cannot remember which personality is really his. In essence, he does not know whether he is a good man or a villain. It’s clear early on that she’s basing this character on Lau, and her confusion about the character’s true nature tells us much about her conflicted feeling towards Lau. And it’s no wonder. In one scene, Lau walks around the apartment they share together talking to Sam on the phone and telling him things that just don’t sound very innocuous, all within earshot of the woman we assume he wants to keep in the dark about where his true loyalties lie. Just what is she supposed to think? The second character is Dr. Lee Sum Yee (Kelly Chan), Yan’s court-appointed psychiatrist. She plays cards while Yan gets some much needed sleep during their rather unsuccessful counseling sessions. After one session, Yan flirts with her rather politely, and she makes no attempt to quote ethical codes that prohibit relationships between doctors and patients. Years later, they run into each other, and Lee makes a very revealing mistake during their brief conversation.

Infernal Affairs is perfectly paced and extremely well directed. Lau and Leung give impressive performances, and their scenes together cackle with energy and raw emotion. It’s a credit to Lau that his character never becomes truly hated. In fact, I suspect many people will have a degree of pity for him. Matching these two performances is the work of Eric Trang, who plays Sam, and Anthony Wong, who plays Yan’s boss, Supervisor Wong, the only person who knows that Yan is really a cop.

Infernal Affairs is largely credited with reenergizing the film industry in Hong Kong, an industry that one of its box office heavyweights once described as producing way too may films that were subpar. By 2002, some of its most famous directors, such as John Woo, had left to make films in the United States, and superstars Jackie Chan and Jet Li had already been starring in American film for several years. However, in Hong Kong in 2002, Infernal Affairs was more popular than both Harry Potter and the Chamber of Secrets and Spider-Man. It eventually spawned two successful sequels in addition to the aforementioned American remake, Martin Scorsese’s The Departed. In addition, in 2002 only four of the most successful films in Hong Kong were actually from Hong Kong; the following year, the number had risen to six. Unfortunately, the upwards trend has not continued, and only two of the most popular films in 2010 were local productions. It’s highly unlikely that Infernal Affairs was the sole reason for the rejuvenation of Hong Kong cinema. In fact, on CNN’s Talk Asia, Andrew Lau attributed his role in the turn around to luck. However, it must be said that there is something very special about Infernal Affairs, and unlike some other recent influential films, time has thus far not diminished it a bit. It is a truly towering achievement that I predict will continue to stand the test of time. (on DVD and Blu-ray)

*Infernal Affairs is in Cantonese and Mandarin with English subtitles.
Posted by Azrael Bigler at 7:16 AM