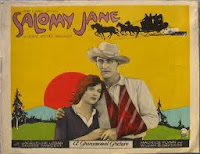 In the opening scene of Lucius Henderson and William Nigh’s Salomy Jane, a young woman steps out of a small crevice in a tall redwood tree. Her eyes look somewhat marveled and inquisitive, as if the world around her were becoming clear for the first time, and in a way, it is. The film later tells us the woman is from Kentucky, and it’s easy to surmise that this is her first trip to the West Coast and therefore, the first time she has witnessed the majestic beauty of California’s Redwood Forest. The camera then pans upward, showing the audience just how towering the redwood behind her really is. Reaching the top, the camera, acting much like an amusement park ride, then descends the afternoon sky, ending at ground level once again where we see the same young woman now mounted on a perfectly white stallion, ready to see the world. The scene is subtle – it has to be – yet the dual message is clear: The first message: this is a woman well aware of her sexuality; the second is an invitation to audience members: Come and explore the West. If you don’t believe me, just read the film’s title card: “Salomy Jane, A Story of the Days of ‘49” Produced in the Famous California Redwoods.

The ’49 on the title card sets the film in the days immediately following the discovery of gold, and the film takes place in the appropriately-named Hangtown, a real mining town now known as Placerville. There we meet a cast of characters, some decent, some morally bankrupt, most of them just trying to get by. From what we see, Hangtown is very much a bachelor town. In fact, we only see three women besides Salomy Jane, and two of them have the dubious distinction of being referred to as flirts, an obvious euphemism for the world’s oldest profession. The third is the unlucky wife of a down-on-his-luck alcoholic named Red Peter Heath, played by William Pike.

The film has several storylines. First, there’s Red Peter Heath’s decision to rob a stagecoach. Whether he’s doing this out of greed or concern for his suffering family is up to viewers to decide. I never got the impression that Red Peter was an evil character; he seems to me a man struggling with inner demons that often prevent him from doing the right thing. Then there’s the arrival of a character known only as the Stranger (British-born actor House Peters). In a poignant scene, we see him stare at a picture of his sister and read the note next to it, asking him to always remember her. The note also references a man in a picture, and when the stranger takes out the picture, we immediately understand that he is the reason the stranger has come to Hangtown. The implication is that the man’s sister has committed suicide, and this is the man that drove her to do so. If we needed any further hint, the man in the picture has the kind of mustache that only movie villains grow. Interestingly, in Bret Harte’s novel Salomy Jane’s Kiss, which the film is based on, the character of the stranger is named Jack Dart, a name that was undoubtedly deemed too suggestive for motion pictures.

The film adds a second revenge storyline, this one involving a man named Larabee (Harold Entwistle) and Salomy Jane’s father, Madison Clay (Matt Snyder). Apparently, their families have had a long feud, and upon learning of Mr. Clay’s arrival, Larabee decides to settle the feud once and for all. The final storyline serves as fodder for comedy, for it involves the continual attempts of the men of Hangtown to woo Salomy Jane. Two of these characters, Colonel G.L. Starbottle (Clarence Arper) and Jack Maybury (Ernest Joy), are particularly memorable. The first is a rather loveable chap for whom money is on an even par with fairness and decency; the latter character is a more serious fellow who makes his money gambling yet has a rather strong sense of justice. It may seem strange to some that so many men are pursuing the same woman, but remember, their options are otherwise pretty limited. As for Salomy Jane, she seems to enjoy being the object of their affection, and yet when she finally does accept a marriage proposal, it hardly seems like the right reason to get married. In fact, if the film has a major weakness, it is the stupefying rapidity with which emotions stir in characters and the less than romantic reasons they stir in Salomy Jane herself. But then again, these are different times.

Salomy Jane jumps back and forth between these four storylines, and often a rather serious scene is followed by a more lighthearted one. The technique works for the most part, with only a few scenes seeming a little inappropriate. The film also has rather long scenes that serve no other purpose than to impress viewers with the California landscape. They slow down the film, and I suspect that contemporary audiences will find these scenes problematic and wish they had been edited a bit more. What the moments demonstrate though is the evolution of cinema. At the time the film was made, cinema was seen as a way of entertaining, making money, and promoting tourism, and yet Salomy Jane, with its multiple storylines, risqué characters, and classic western storyline, is also an indicator of things to come, for it makes D.W. Griffith’s industry-shattering film The Birth of a Nation seems the logical next step in the evolution of film as an art form.

Salomy Jane is a fun film that has its fair share of silly, exciting, and slow moments. The film is made stronger by the performances of its cast, in particular Latina actress Beatriz Michelena as Salomy Jane. Michelena continued acting for just six more years and ended her film career having made just thirteen films. I look forward to seeing more of them. House Peters continued acting until 1961. He passed away six years later at the age of 87. Director William Nigh, here making his directorial debut, went on to make a hundred and twenty more film, including many films in the Mr. Wong series. As the film that started it all, I’ll end by echoing the words of the The New York Dramatic Mirror made so long ago: Salomy Jane is “a winner.” (on DVD)

Labels: 3 and a half stars, Lucius Handerson, reviews, Silent Films, William Nigh