Review - It's a Wonderful Life 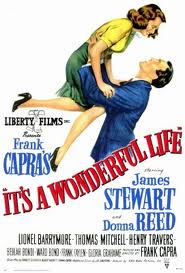 During the Decembers of my childhood, viewing Frank Capra’s It’s a Wonderful Life was an annual tradition. It was shown on television every December, and it was so beloved that the owner of The Magic Theater would hold free screenings of it. It was his gift to the residents of Nevada City, Grass Valley, and all of the towns nearby. Perhaps because of this oversaturation, I developed a bit of a love-hate relationship with the film. What I could remember of it, I loved, but I hated the idea of sitting through it again. (Bear in mind that this was during my “black-and-white movies are boring” phase, which I didn’t really grow out of until after I graduated from high school.) In honor of the holidays this year, I decided it was time to give it another spin, to return to the wonderful small town of Bedford Falls and all of its joyful and optimistic residents. And like a movie character who returns to his childhood home after a long self-imposed exile, I now find it hard to resist saying that old cinematic cliché: I shouldn’t have stayed away for so long.

It’s a Wonderful Life is the story of George Bailey, a man whose instinct even as a young child is to fight, not to flee. This is a little ironic given the fact that his lifelong dream is to leave Bedford Falls and lead a life of excitement and purpose. See, George, like many young people, wants to be someone, and he’s convinced that he will never amount to anything in a small town. I suspect that many people these days would echo those sentiments, especially those with visions of being the next Internet-made millionaire. One reason George’s head is filled with visions of adventure and excitement is that a magazine featuring the world’s many exotic places and people has started publication – National Geographic. To people of George’s time, reading this magazine must have been the equivalent of watching the moon landing in 1969 or viewing Curiosity’s most recent discoveries on the surface of Mars. New world’s – be they terrestrial or intergalactic – stir in people the impulse to leave their comfort zone and explore, and so upon his graduation from high school, George Bailey is determined to go to college outside of Bedford Falls and then never look back.

However, life has a way of disrupting carefully-made plans and delaying lifelong dreams, sometimes forever. George’s dreams are put on hold after the death of his father, and they are further postponed after he agrees to take over his father’s business. He does this for the noblest of reasons, but it is clear that his heart is not entirely into it. The explorer in him still has dreams of scaling the world’s tallest mountains, and the architect in him still envisions himself building the kinds of skyscrapers that inspire awe in every person who sees them. His dreams certainly don’t include working at a bank for the rest of his life. I suspect that many viewers will see someone they know in George Bailey. He’s the person who loved singing but never got the chance to become a famous singer, the athlete who didn’t get a chance to play in the major leagues despite having considerable talent, the potential doctor who got a job in a factory because his family needed the money.

Like many of the small towns in films, Bedford Falls is a pretty marvelous place to raise a child in. It is a place where everyone knows each other, where it is normal to marry your high-school sweetheart, and where father always knows best. It is also a place where the men are all gentlemen and the women are generally the type any mother would love for her son to bring home. However, the film wisely does not build Bedford Falls up to be as idyllic as it could have, for doing so would result in George coming across as a bit of an ingrate. No, the world is changing, and Bedford Falls has its share of problems, most of them having to do with economics. There is a clear line between the haves and the have nots here, and therefore, the villain of the film is not the big city with its numerous temptations and vices, but the town’s wealthiest resident, Mr. Potter, who, if he had his way, would evict every struggling resident from their homes instead of extending them a helping hand. This George’s father did, and George has followed in his father’s footsteps. At one point, we become aware of Bailey Park, a section of town build from scratch and financed by loans from George’s bank, loans, it should be pointed out, which would never have been approved by any of the other banks, most, if not all, of which are owned by Mr. Potter. In fact, in one scene, we see what a Potter-financed city would look like, and like the alternate universe that Marty McFly steps into in the second Back to the Future film, it isn’t pretty. George, therefore, is David to Potter’s Goliath, and his bank is more like Bangladesh’s Grameen Bank than any of the major ones that exist today.

There is much to admire in It’s a Wonderful Life, from the beautiful way the film is structured to its smart and realistic screenplay by Francis Goodrich, Albert Hackett, Jo Swerling, and Frank Capra. Director Frank Capra gets impressive performances from his cast, in particular from the always reliable Jimmy Stewart. Part of what remains admirable about Stewart’s performance is that he never forgets two of George’s most memorable traits, his need to pursue his dreams and his spunk. In the film, we see George as a teenager displaying an impressive amount of swagger; we see this from time to time in George after he has grown up, too. Also memorable is Donna Reed as Mary. Mary sees something special in Bedford Falls, and in one crucial moment, she makes it clear that its residents come first. Reed plays the moment just beautifully.

Like many of the best films, It’s a Wonderful Life was a box office disappointment upon its initial release in 1946. It has since found a place in the hearts of both moviegoers and critics, and deservedly so. If there is a flaw in the film, it is its final act, which plays like a collection of flashbacks, the sole purpose of which seems to be to remind viewers of what they have already seen. Therefore, we’re told again about George’s ice rescue, his ear condition, his childhood boss, and so on. It is as if Capra and his co-writers didn’t think the audience would remember all that came before. However, while I suspect that most viewers will not need the reminder, I honestly can’t think of another way for the film to end.

The film reminds us that there has always been a struggle between those whose response to human suffering is cold and unemotional and those whose response is sympathetic and caring. It reminds us of the power and connection of communities and of the lifelong respect that comes with being a help to society. Moreover, it reminds us that sometimes life throws roadblocks at us for a reason, that sometimes we are more valuable in a field other than the one we would have chosen for ourselves. We should all be as rich as George Bailey. (on DVD and Blu-ray)

Labels: 4 and a half stars, Frank Capra, James Stewart, reviews