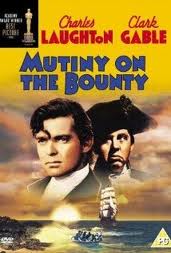 If the scroll that opens Frank Lloyd’s Mutiny on the Bounty is accurate, the events that unfold in the film mark a turning point in how humans treat each other. As the film tells it, before the mutiny depicted in the film, a ship’s crew and officers could be treated inhumanely by their higher-ups without fear of retaliation because a captain had to maintain discipline, and one way of ensuring discipline and loyalty, it was believed, was to be harsh and inhumane. By the end of the film, there has been an awakening, the birth of a new awareness of human equality and brotherhood.

One scene in particular demonstrates these two competing views. In the scene, two small row boats are pulling the Bounty as a result of there being no wind. This requires a small group of about twelve people to row as hard as they can in order to pull the ship, and from the expressions on the men’s faces, it is clear that it is no easy task. One boat is being led by a supporter of Captain Bligh, the ruthless captain of the Bounty, and his motivational methods involve shouting insults at the men rowing the boat and thrashing those he can reach with a whip. The other boat is led by a young midshipman named Roger Byam. Byam chooses to use words of encouragement to stir his men to give their all, and when ordered to use the whip at his disposal, his hand freezes before the whip has a chance to fall on any of its possible targets. The question is: How will compassion defeat brutality?

The film stars Clark Gable as Lieutenant Fletcher Christian, Charles Laughton as Captain Bligh, and Franchot Tone as Roger Byam. The three give powerful performances, and they were each nominated for Best Actor for their work, marking the first time three people were nominated for Best Actor for the same film. It may also be why neither of them won. Christian and Laughton are polar opposites, one favoring the use of heavy-handed tactics with the crew and the other opposing them. Byam stands in the middle, loyal to the chain of command, yet sympathetic to the crew.

The film does an excellent job of contrasting Christian and Bligh, and they are both extremely complicated characters. The film does not make the case that Christian’s actions are entirely correct. As Byam points out, there is nothing particularly noble about setting men adrift when death is almost a near certainty, and as a result, we can understand his sentiments when he tells Christian that they can never be friends again. In addition, Christian is well aware of the impact his actions will have on his family and his reputation. As decent as his intentions were, he will forever be known as a mutineer, a traitor to the crown he has been so loyal to over the years. As for Bligh, our impression of him is challenged by his actions immediately following the mutiny, and it is impossible not to be impressed by his leadership. His obsessive, possible fatalistic actions later in the film can be compared to those of Captain Ahab, for it seems clear that revenge is more important to him than the safety and security of those serving with him.

Mutiny on the Bounty is notable for several other reasons. All too often in films, English speakers arrive in new worlds and set about teaching English to the inhabitants of those areas. In some movies, all one has to do is listen to your heart in order to magically acquire the English language. Here, though, it is the English speakers that learn the new language, and like most people, they struggle with its many complexities. It goes without saying that a movie that places single men on an island paradise will have an element of romance to it, and yet the romances that do take place in the film seem entirely authentic. In fact, any actor wanting to know how to realistically portray love at first sight should study Gable’s performance. His expression when he first sees Maimiti (Mamo Clark), the woman who becomes the love of his life, is absolutely perfect. To her credit, Clark, here making her film debut, matches Gable’s look convincingly.

The film errs slightly when it goes for levity and laughs at the crew’s expense. For example, instead of realistically dealing with food shortages and giving his opinion on food rations, the ship’s cook makes goofy expressions and acts like an amateur. On the ship, there is a running gag about the best direction in which to hurl pails of food waste. One guess just who the waste lands on. On the island, he finds himself being courted by a single woman with at least five children. His response is to run away in comic fashion accompanied by music that would better fit a slapstick comedy than a naval drama. Other members of the crew have equally silly moments involving viewing beautiful women and discussing food. While these moments are unnecessary, thankfully they are sparse enough so as not to distract viewers from the film’s more dramatic storyline.

Mutiny on the Bounty is one of those rare films that works pretty much from start to finish. It is filled with memorable moments and unforgettable characters, and it treats them with respect and dignity. Bligh could easily have just been portrayed as being sadistic, yet here we see him at both his worst and his best, and by the end of the film, we realize that sometimes people with great skills do terrible things for what they think are the right reasons, and sometimes good people do the wrong thing for the right reasons. Only history can ultimately tell us who was correct.

However, here history can be deceiving, for the end of the film is not really the end for these characters, and from what I read on Wikipedia, the true events of the 1787 mutiny were not quite as clear-cut or as rosy as they are depicted in the film. However, a film is not history. It is first and foremost a story. This one just happens to be about real people in a variation of a real situation. It is no less powerful just because it plays loosely with the facts. Mutiny on the Bounty remains a powerful, complex, and captivating film. It is one of the finest of its genre. (on DVD and Blu-ray)

*Mutiny on the Bounty was awarded the Oscar for Best Picture of the Year at the eighth Academy Awards. It was its only award.
Posted by Azrael Bigler at 9:00 PM